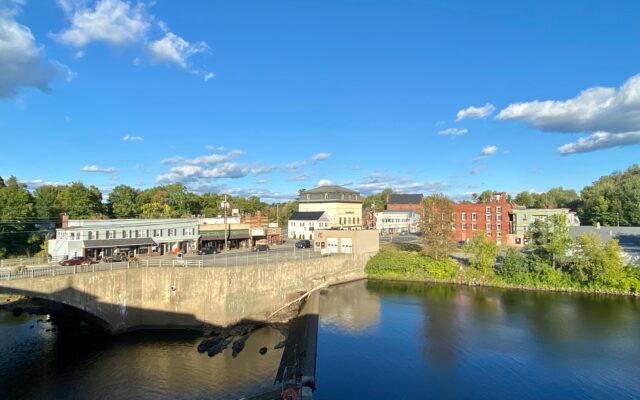 DOVER-FOXCROFT, Maine — Dover-Foxcroft could finally see a 2003 downtown revitalization plan flourish in a new partnership with the Maine Department of Transportation.

Community leaders summed up the plan from nearly 20 years ago and where the town stands now during a virtual meeting Friday, hosted by the town’s Climate Action Advisory Committee. They called the collaboration — approved by the Dover Foxcroft Select Board on Aug. 22 — a once-in-a lifetime chance for the community.

For a small town in Piscataquis County, where money and resources are limited, major downtown redevelopment could make a big difference for residents and businesses that sometimes struggle to thrive in rural places. It could also draw more visitors and boost the local economy. With federal funding and MDOT initiatives geared toward rural communities now available, some say it’s a fortuitous time to pursue projects that have been discussed for years but never materialized.

“We have an opportunity and, frankly, have community momentum now to create a new vision of our downtown that will be more resilient, more climate and person friendly and will work for all residents, businesses and visitors for the next 100 years,” said Lesley Fernow, who is involved with the climate committee.

Residents recently celebrated 100 years of Dover and Foxcroft joining, and old designs aren’t working anymore, she said. Fernow pointed to stalled traffic and frustration while driving through the town, especially in mid-summer. Pedestrians and bicyclists continue to run into trouble, even with a recently upgraded street crossing on South Street, she said.

Historically, the high cost of improvement projects has been a significant barrier. But MDOT’s programs give Dover-Foxcroft access to a consultant and federal funding to complete improvements, like those related to transportation and parking, Fernow said.

The plan from 2003, completed by Bangor-based WBRC Architects, explored creating a gateway to town coming from the south on Route 7 into South Street, which still remains relevant, said Select Board member Thomas Lizotte, who was on the board when the study was completed.

The entrance to downtown is undefined, the study noted, and only the Piscataquis Chamber of Commerce building signals that people have arrived in Dover-Foxcroft, Lizotte said.

The study also looked at Union Square and the Piscataquis River waterfront corridor, further down South Street to downtown, Lizotte said. The study did not focus on Monument Square and the North Street corridor, specifically from the post office to Summer Street, which he would like to see addressed as well.

Using a series of community initiatives, MDOT works with municipalities to build transportation infrastructure for the next several decades, said Jarod Farn-Guillette, a regional transportation planner and travel liaison. The agency also addresses placemaking in rural communities, or “bringing back that Norman Rockwell-esque feel that we once had in our historic downtowns,” while also reinvigorating the local economy, he said.

“Our goal is to have an efficient one-and-done, so we can come in and rehab your transportation system where it’s heavily used and not have to come back for a very long time,” he said.

The Planning Partnership Initiative addresses time-sensitive feasibility studies and locally initiated planning, according to the MDOT website. The Village Partnership Initiative is available to communities that have or can agree upon a local vision, and projects vary from spot improvements to large investments.

Dover-Foxcroft would work with an outside consultant who produces several options for redevelopment, cost estimates and a schedule of what is completed when. The MDOT provides technical assistance, and the public is also involved, Farn-Guillette said.

Once a kick-off meeting occurs, it takes about nine months to draft a plan, then from three to four years before improvements happen, he said.

Town Manager Jack Clukey, who started his job in 2004, said people would ask him when ideas in the 2003 downtown revitalization plan would come to fruition, which has always hinged on resources.

While various projects have been completed over the years, there are still plans on the table that need to finally be tied up, he said. This is an opportune time to merge already planned MDOT projects — such as South Street reconstruction and deficiencies on the Main Street bridge — with a larger transformation, he said.

“Our goal is not just to beautify the downtown and make it more attractive to people coming for economic redevelopment,” Fernow said. “It’s also to create a healthier downtown community, where we can walk and encourage people to ride bikes and spend time in some green space.”

Thank you for reading your 4 free articles this month. To continue reading, and support local, rural journalism, please subscribe.

Bangor, ME, September 27, 2022 --(PR.com)-- POD graduates are part of the next generation of health care professionals at Northern Light Health working toward improving the patient experience.For the past five years, Husson University has been helping to educate Northern Light Health employees through their Professional and Organizational Development (POD) program....

Opinion: Abortions Are A Matter Of Harm, Not Freedom

Wearing an anti-abortion T-shirt, a father and his sons from Central Florida pray, as abortion-rights supporters protest outside of the Supreme Court, with one sign saying "America is not a Christian nation," Wednesday, June 29, 2022, in Washington. Credit: Jacquelyn Martin / AP The BDN Opinion section operates independently and...

Mason Galway runs a Class V rapid on the Magalloway River. Credit: Courtesy of Ron Chase Twenty-six years ago, my late friend Bill Kaiser recruited me to represent the Appalachian Mountain Club in dam relicensing tests on the Rapid and Magalloway Rivers in western Maine. I was one of perhaps...

Bangor's Planning Board Approves New Subdivision Amid Concerns From Neighbors

The Planning board met four times to discuss the proposal and hear public comment. BANGOR, Maine — The City of Bangor's Planning Board approved a new development to bring more housing to the area, as finding a place to call home in the queen city is a challenge. The Planning...