She’s worked at Duke for 12 years and has been a big Duke fan since she was 12, but on this Saturday, Sept. 17, the day Duke welcomed North Carolina A&T for the annual Employee Kickoff Celebration, her maternal bond beat stronger than her Duke allegiance.

Ivy’s son, Caleb, donned No. 47 as the primary punter on the NC A&T football team.

Throughout the game, the cheers from the Brickhouse contingency were loudest during the three times Caleb took the field to boot the football away and pin Duke in its own territory.

“When it came time for him to punt, everybody had their phones out and were watching,” said Ivy, a research analyst for the Duke Reading Center. “Of course, the people around us are like, ‘What is wrong with them? Y’all are in the wrong section.’”

Among the 32,802 fans who packed Wallace Wade Stadium were Duke staff and faculty who claimed about 18,000 free tickets to the annual Duke Football Employee Kickoff Celebration. Duke beat the Aggies 49-20 and remains undefeated.

“We certainly appreciate the buzz that is out there about what we are doing,” Duke Coach Mike Elko said. “But we know we are a work in progress, and we’re a group that has got to continue to work and continue to grind every day to get better.”

Here are some scenes from Saturday’s game. 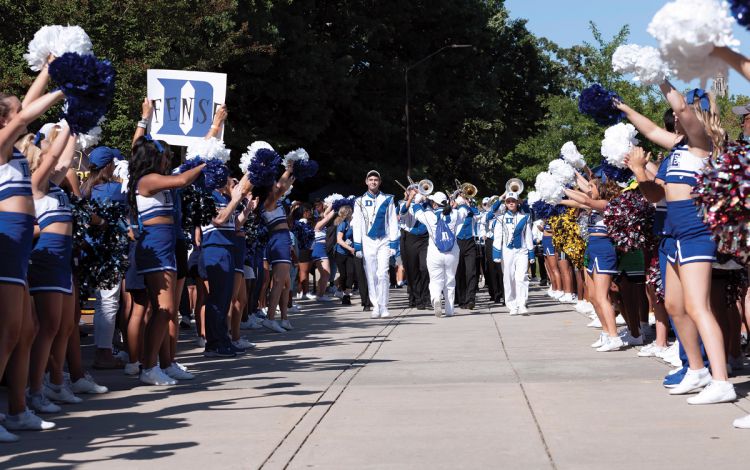 Before the game, a crowd of Duke fans and employees gathered to see the Blue Devils arrive at Wallace Wade Stadium a few hours before kickoff. Those dedicated fans cheered the team to the locker room while players and coaches were ushered in by the Duke University Marching Band and cheerleaders. 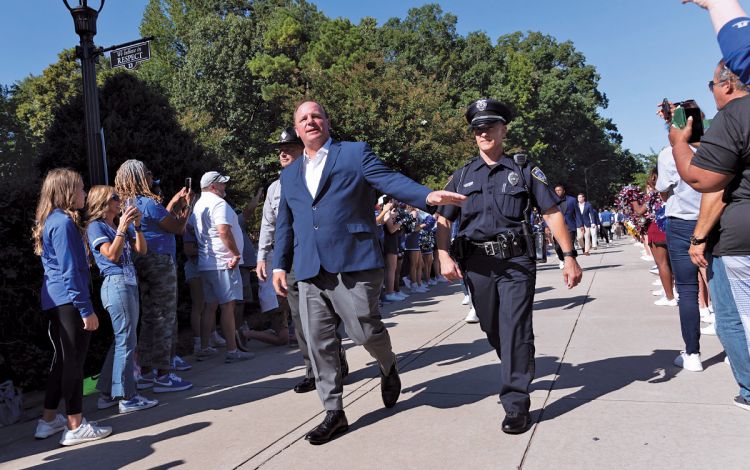 Duke Football Coach Mike Elko greeted fans during the Blue Devil Walk prior to his team grabbing its third-straight victory to start the season. Elko, who is in his first season at Duke, became the first Blue Devils coach to win his first three games since Fred Goldsmith in 1994.

“We don’t want to overstate it,” Elko said about the importance of Duke’s 3-0 start.” We are very humble in this building. We know we have a lot of work to do to get this thing ultimately where we want it to go.” 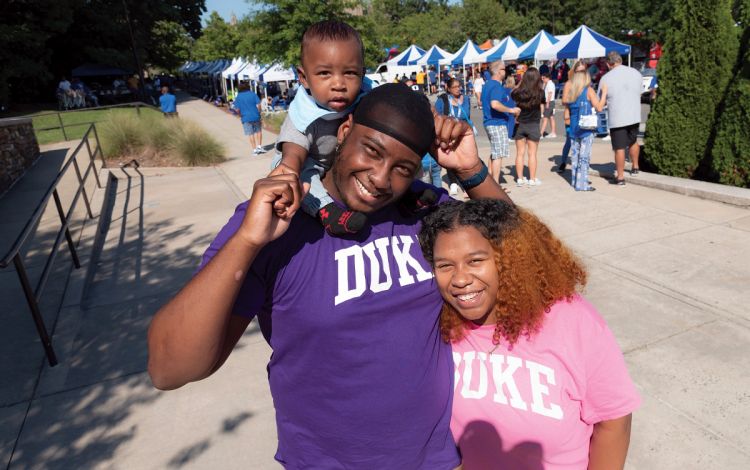 Among the supporters in the crowd for the Blue Devil Walk was Tyra Click, a nursing care assistant for the Duke Endocrinology Clinic. Click, along with her husband, Marcus Allen, brought their son, Adonis, to see the Blue Devils for the first time. 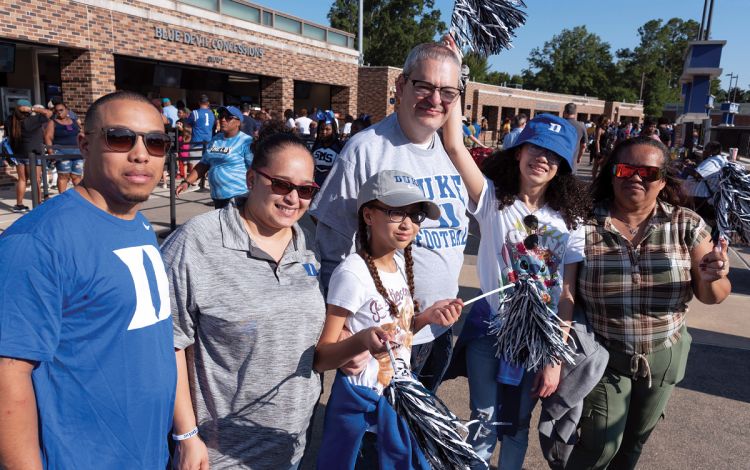 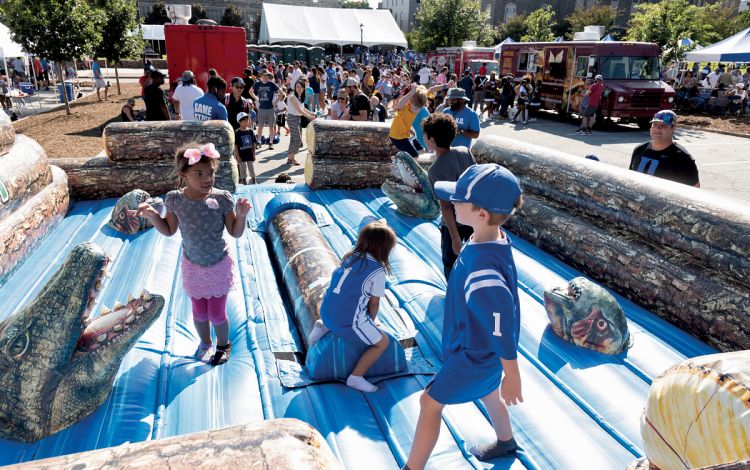 For many children, it was their first chance to experience Duke Football and take part in an event on campus. 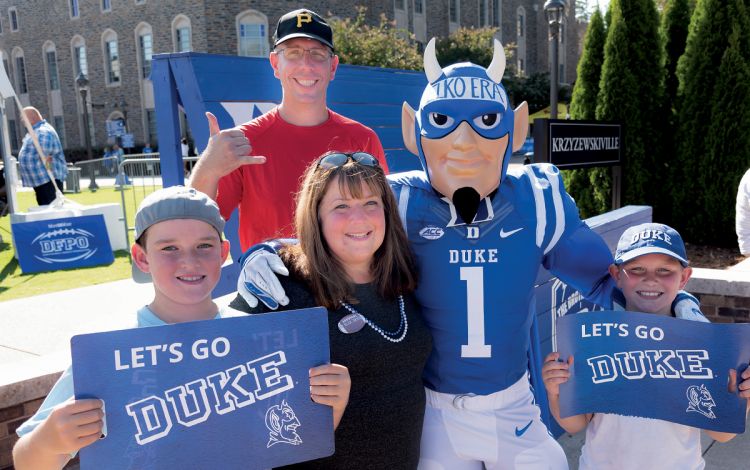 At her first-ever Duke Football game, the Blue Devil was lucky enough to stop and take a photo alongside Deanna Szymanski, a unit services coordinator at the Duke University Hospital Emergency Department.

Szymanski came early to Saturday’s game alongside her husband, Mike, son, Christopher, on the right, and a friend, Hudson Proctor. Christopher and Hudson enjoyed exploring the Junior Blue Devils Skill Challenge located on the Duke practice field, while the whole family proved to be good luck in seeing their first Blue Devils victory.

“I was excited about it because we’d never gone,“ said Szymanski, who has worked at Duke for 17 years. “I always thought they were kind of boring, but it was actually pretty fun.” 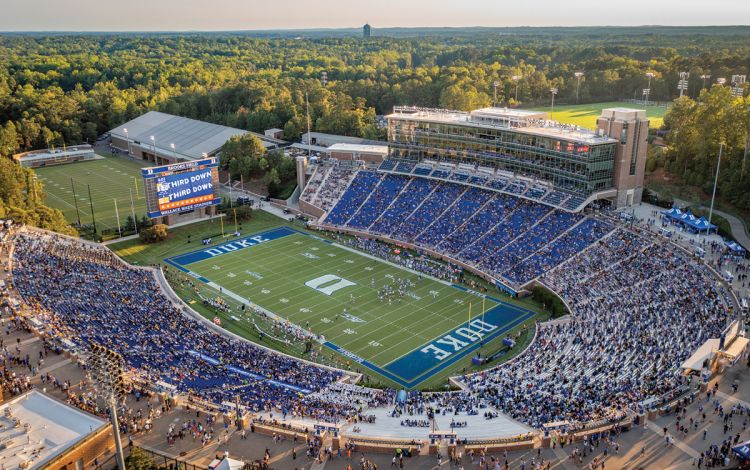 Saturday’s game drew 32,802 fans to Brooks Field at Wallace Wade Stadium. It was the largest crowd to watch a Duke home football game since 40,004 came to was Duke face visiting Notre Dame on November 9, 2019. 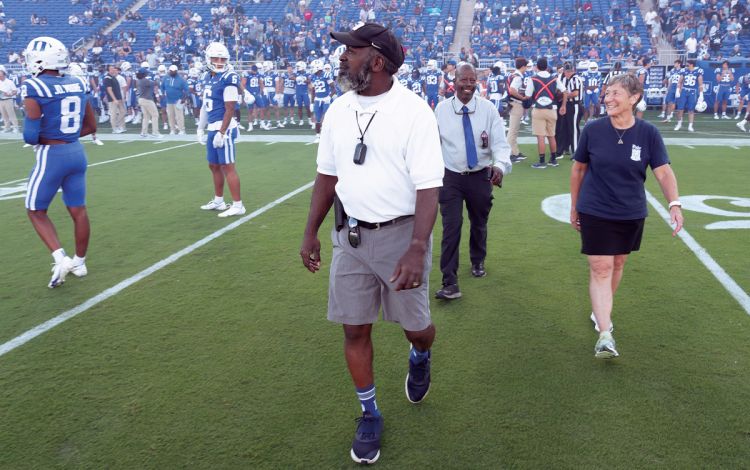 Burney, a patient transporter at Duke University Hospital, went to the game with his brothers, Anthony and James, and his nephew, Donald, who all traveled from Charlotte.

“They were excited to see everything,” Burney said. “They had a great time, and I appreciated them coming to support me.” 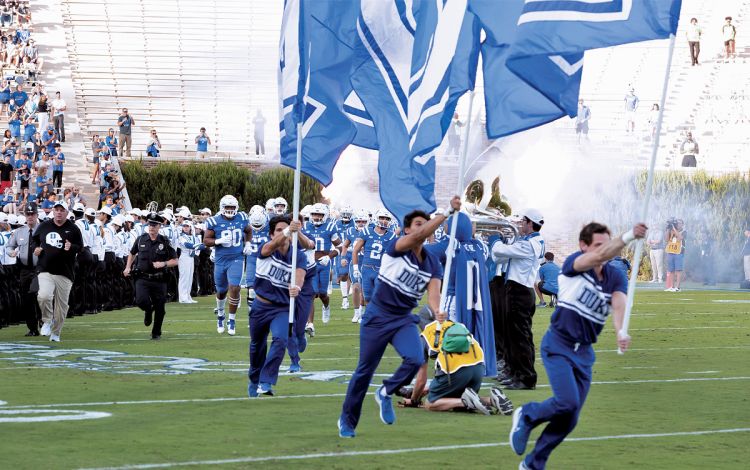 Head coach Mike Elko’s team began the game as quickly as they ran onto the field from the tunnel just before kickoff.

The Blue Devils started on a 21-0 run in the first quarter before a full home crowd. Through three games, the team has outscored opponents 45-0 in the opening quarter, creating room for the team to play with a lead. 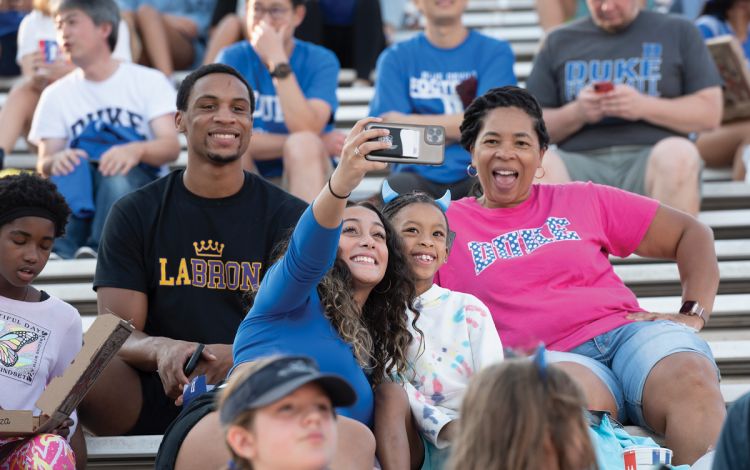 Marlena Scarborough of the Duke Population Health Management Office, pictured on the right in pink, leaned in for a selfie with Kyerstin Cooper, and her granddaughter, Jona Privette, in the stands on Saturday.

In between action, Scarborough and her family members who came to the game with her had fun documenting a time spent together in the stands. 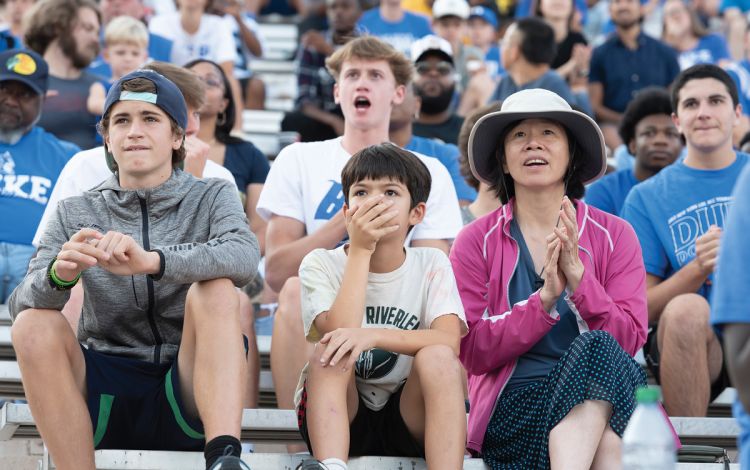 Fans who enjoyed Saturday’s game, or those who would still like to catch the Blue Devils in action, will have four more chances to cheer on Duke at home this season. Duke has home football Saturdays left with games against Virginia on October 1, North Carolina on October 15, Virginia Tech on November 12 and Wake Forest on November 26.

Single-game tickets can be purchased at goduke.com or by calling the Duke Athletics Ticket Office at 919-681-2583. 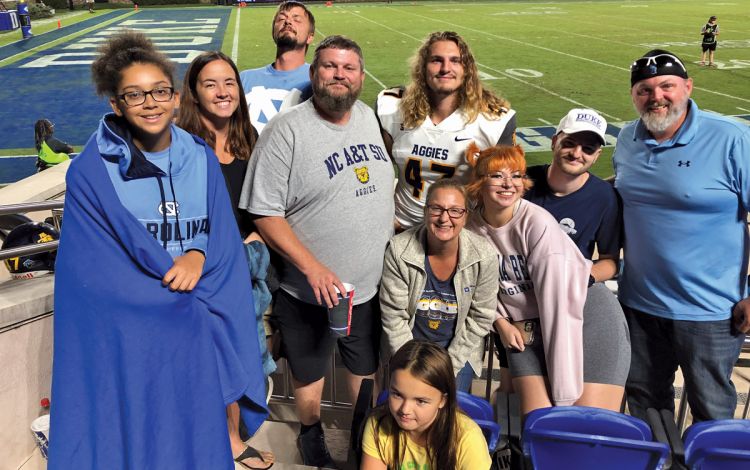 After the game on Saturday, Ivy Brickhouse, the research analyst for the Duke Reading Center, gathered with a crew of friends and family who came to support her son, Caleb, who is amid his first season as the punter for the Aggies. He is using his platform to raise money for a cause.

Ahead of the game, Ivy recalled many Duke Employee Kickoff games where she sat next to Caleb in the stands looking out onto Brooks Field at Wallace Wade Stadium.

When he was a kicker in high school, Caleb told his mom he would one day play on that field himself, a dream that became reality on Saturday. Even though North Carolina A&T lost, it was a joyous moment of celebration for the Brickhouse family.

Letter To The Editor: Reelect Brenner To Continue Effective Service To Senate District 30

Letters increase font size I first met Democratic Sen. Stacy Brenner when she made a presentation to the Scarborough Kiwanis Club, reporting on important legislation enacted during the 2021 legislative session. Having worked for and with state legislators for nearly 25 years, I was impressed with her understanding of the...

The Windfall Elimination Provision was established in 1983 and still exists in 15 states. It affects the Social Security payments some public-sector employees get. MAINE, USA — Scot MacDonald of Scarborough has been retired from teaching since June. So far, life on the other side of work has been pretty...

Tripadvisor Reveal Best Restaurants Across The UK With Their 2022 Awards

The 2022 Best of the Best Restaurants are calculated based on the quality and quantity of traveller reviews and ratings for restaurants on Tripadvisor collected from July 1, 2021 through June 30, 2022, specific to each award subcategory, as well as an additional editorial process.The lists are broken down into...