Explainer-What Election Deniers Could Do In 2024 If They Win U.S. November Midterms By Reuters 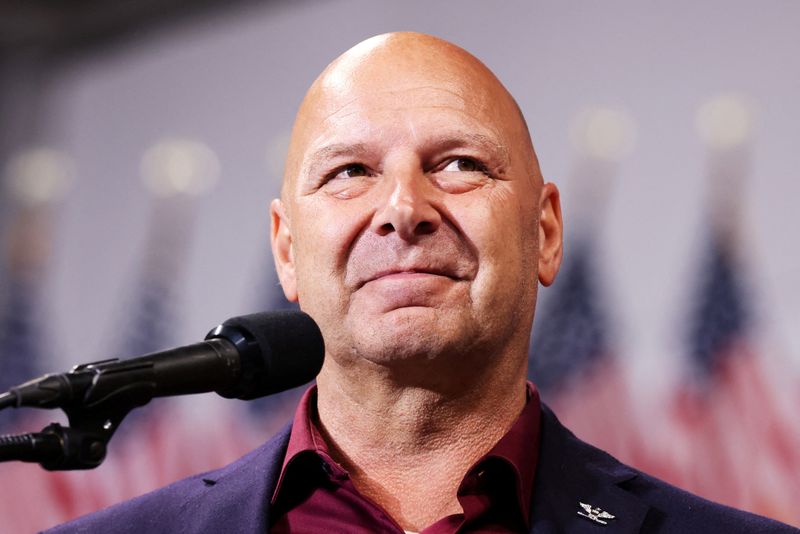 (Reuters) – Several Republican candidates for governor and secretary of state in this November’s congressional elections are election deniers in battleground states that play a decisive role in U.S. presidential elections.

All back former President Donald Trump’s false claims that there was widespread fraud in the 2020 presidential election won by Democrat Joe Biden.

Voting rights groups and many Democrats worry that if the candidates win their races in these midterm elections, they will be in key positions to influence the outcome of the 2024 presidential election.

Individual states send these elector votes, which represent the popular vote, to the U.S. Congress for certification, a vital step before a new president can be sworn in. It was that certification ceremony that Trump supporters disrupted during the Jan. 6, 2021, assault on the U.S. Capitol.

This November Trump-backed Kari Lake and Mark Finchem are running for governor and secretary of state in Arizona; Michigan features the duo of Tudor Dixon and Kristina Karamo, and in Pennsylvania the Republican gubernatorial candidate and election denier Doug Mastriano gets to appoint the secretary of state if he wins the governor’s mansion.

What most worries voting rights groups and constitutional scholars is the potential for a governor and secretary of state, working in tandem, to dispute or ignore the popular vote total, to refuse to certify a presidential election result, or even to claim the losing candidate actually won their state.

In a May email to supporters, Finchem said that if he had been Arizona’s secretary of state in 2020, “we would have won. Plain and simple.”

Lake called for officials in charge of the 2020 election to be jailed and said she would never have certified Biden’s win if she had been governor.

Mastriano, a state senator, introduced a failed resolution after Trump lost Pennsylvania in 2020, claiming falsely that it was the Republican-controlled legislature that had the power to determine which candidate gets the state’s presidential electors’ votes. He was present at the Jan. 6 assault.

In Michigan, Republican secretary of state nominee Karamo has claimed Biden is an illegitimate president and she would not have certified his 2020 win in her state.

Michigan’s gubernatorial candidate Tudor Dixon is also an election denier, although she has stopped short of saying she would have blocked Biden’s victory.

Refusing to certify election results would immediately be met by lawsuits and pleas to state courts to reverse such unprecedented actions, and there is no guarantee these Republican office holders would ultimately succeed in overturning results if they decided to try.

Yet at a minimum such radical action would delay election results, likely throw the country into chaos, undermine faith in the voting system and potentially lead to civil unrest.

Arizona’s Lake and Finchem, Michigan’s Karamo and Pennsylvania’s Mastriano all belong to a group founded in 2021 called the America First Secretary of State Coalition.

With extensive powers to potentially rewrite election rules, especially with the support of their Republican-controlled state legislatures, all four have signed on to the stated goals of the secretary of state coalition, which include: eliminating vote by mail, using just paper ballots, and restricting voting solely to Election Day, thus ending early voting.

Democrats accuse Republicans of crafting restrictions that diminish the clout of Black and other minorities who tend to vote for Democrats. Republican say they want to stamp out fraud although there is no evidence of widespread voting fraud in U.S. elections.

Lake, Finchem, Karamo and Mastriano also support ending the use of vote tabulation machines and replacing them with hand counts.

“I could decertify every machine in the state with the stroke of a pen via the secretary of state,” Mastriano declared during a March radio interview.

Lake, in Arizona, has appeared at events wielding a sledgehammer, which she says should be used on what she claims are fraudulent counting machines that tipped votes to Biden in 2020.

In Nevada, another swing state narrowly won by Biden, Republican secretary of state nominee Jim Marchant, along with Mastriano in Pennsylvania, have suggested wiping the voter rolls clean and getting residents to re-register. They cite a need to rid the rolls of what they claim are bogus voters, a phenomenon multiple studies have found is almost non-existent.

Voting experts say such moves will effectively disenfranchise millions of voters, especially low-income residents who lack the means to get to polls and who rely on mail-in voting and early voting.

Hand counts of paper ballots is logistically impossible, voting experts say. Tens of thousands of workers would be needed to count the votes, in addition to being far less accurate than electronic vote counters. Wiping voting rolls clean would sow chaos and inevitably lead to scores of voters losing their right to vote, they add.

Dems Light Up Airwaves In Key Secretary Of State Races

The Democratic Association of Secretaries of State, the party’s main campaign arm for races for states’ chief election officers, is launching its largest-ever TV ad campaign, booking $11 million worth of TV ads across three critical battleground states.The spending from DASS — the first salvo in a general election spending...

Spencer Platt/Getty Images (WASHINGTON) — Jury selection is underway Tuesday in one of the most complex and crucial cases being brought by the Justice Department in connection with the Jan. 6 attack on the U.S. Capitol, as five members of the Oath Keepers anti-government group — including its founder Stewart Rhodes —...