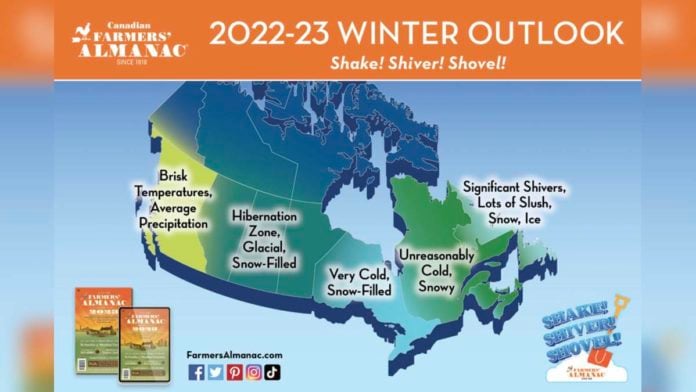 LEWISTON, ME—The winter of 2022-2023 is slated to be very cold and snow-filled in Ontario, according to this year’s edition of the Farmers’ Almanac.

Pete Geiger, philom., the editor of the publication, said this year will bring “plenty of shaking, shivering and shoveling” to Canada.

“In your part of Canada, we’re saying unreasonably—not unseasonably, unreasonably—cold and snow. So, you should have winter as it should be,” said Mr. Geiger.

The annual publication has long offered predictions about the weather trends in the coming year, using a closely guarded formula. Its accuracy has varied from year to year, but many people continue to swear by the forecasts.

The company formerly published a print version of its Canadian Farmers’ Almanac, but in recent years has only issued print versions for the United States. It has continued to publish Canadian forecasts on its website, FarmersAlmanac.com.

The Farmers’ Almanac forecast for winter 2022-2023 called for frigid Arctic air to blanket the region in January, possibly becoming the coldest such system in recent years. Temperatures, the authors wrote, could reach between -20° and -40° Celsius between January 16 and 19.

The almanac said an active storm track will bring weather from the Gulf of Mexico up to New England and the Maritimes, bringing plenty of snow along for northern areas. Around January 20 to 23 especially, it said Ontario could see a major snowstorm.

“I’d want to look at January and be prepared,” said Mr. Geiger, adding that bigger snowfalls will continue into February before tapering to light snow near March.

“We want people to be sure that they’re ready for weather when it happens. And in Canada, we know it’s coming.”

A nor’easter may sweep into Canada around February 16 to 19, bringing as much as 60 centimetres of snow for some areas.

After the vernal equinox, which marks the beginning of astronomical spring, the almanac said the rest of March should go out like a lion, the opposite of the old weather proverb that says March usually ends like a lamb.

Across Canada, that time of year could bring heavy snows, rainy downpours and storms in 2023.

In the shorter term, the almanac said the latter half of September should bring severe thunderstorms to the Great Lakes area, followed by clearing, colder weather. At the very end of the month, it said squalls should move in from the west.

October was slated to begin with fair weather, before switching to wet or unsettled conditions through Thanksgiving. Close to the end of November, the almanac called for heavy snow, before December would bring milder air and a mix of rain and snow.

This year’s forecast premiered earlier than usual, something Mr. Geiger attributed to the sharp increases in heating fuel costs. He said the earlier schedule would allow people to better prepare for the season ahead.

While some don’t place much faith in the forecasts of various almanacs, it’s the content besides the weather that has helped it, and some competitors, stay relevant for more than a century.

“I think we change with the times. This is our 206th edition,” Mr. Geiger said. “We’ve always been alert to what’s important to people, and I think that’s important as well.”

Mr. Geiger said there were many helpful tips in the almanac, including a way of dealing with drafty windows.

“We have one that we talk about putting bubble wrap on your windows, so if you have glass that’s leaking air, you can put bubble wrap … against the window, it stays there and it keeps the cold out.”

Practical advice and curious trivia have helped the almanac become a popular read for many years. Mr. Geiger said having a physical publication has helped with tradition-building, as it can bring more of a warm, comforting feeling than an online information source.

“We’re trying to inspire people to be more self-sufficient, at a time when it just seems that it’s maybe crazier than ever,” said Mr. Geiger. “That’s the value of the Farmers’ Almanac. And I think it’s always been the value.”

This publication, the Farmers’ Almanac, has existed since 1818. A competitor, the Old Farmer’s Almanac, dates back to 1792. The Farmers’ Almanac issues its forecasts two years in advance and its website cites its accuracy as between 80 and 85 percent.

Kate Snyder is trying not to contact her parents in Venice, Florida, too often because she knows they might lose power when Hurricane Ian strikes, but she said it is hard not to think of them every moment. “It’s supposed to hit in the next few hours,” Snyder of Lewiston...

What The Heck Was This Blasting Through The Night Sky In Central Maine?

Earth is so curious isn't it? It's big, round, and peculiar. We have yet to discover all of the wonders of the world, but we're working on it.Let's talk about beyond earth. The skies and the story they are telling us. I am an avid "sky-watcher" I love looking at...

The Vietnam Veterans of America Chapter #268 gathered at the Lockport Navy Marine Club Tuesday night with four particular individuals in mind.First off was Ashley Butcher who started Clay for Heroes back in 2012. She was looking for a way to thank veterans and with the help of other veterans,...