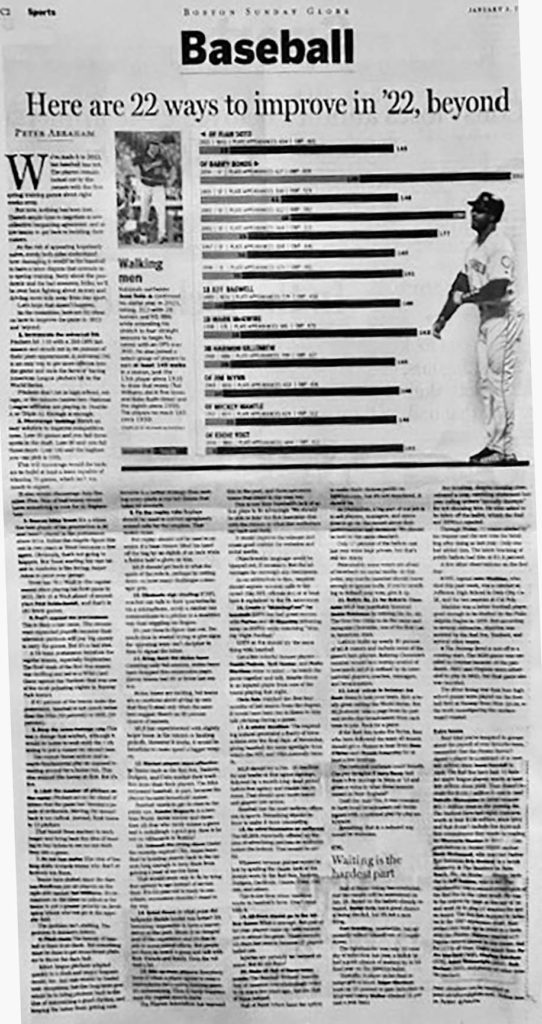 IS THIS HEAVEN? No, it’s the Boston Sunday Globe Baseball “Notes” page, a whole page of baseball miscellany.

In 1972, Peter Gammons started writing baseball “notes” in the Sunday Boston Globe, a whole page of baseball news in which the baseball beat writer “empties out the notebook.” Over the years it has become a Globe staple, a must read.

This column this week is in that spirit, a potpourri of baseball thoughts in these final days of the season, anticipating the upcoming post-season. It’s long, but it’s supposed to be.

(Statistics here may be a few days out-of-date: my deadline is Monday noon — and they play this game every day!)

I was born in Boston and moved to Maine in my first year. Maine-Boston, didn’t matter. Loyalty to the Red Sox was my birthright and I have been helpless over a lifetime to modify that emotional commitment.

I have always had a powerful attachment to another team as well, my second favorite team: that is, any team playing against the Yankees.

For the first half of this season, the Yankees were a juggernaut, starting off 61-23, on a pace to win 118 games, drawing comparisons to the 1927 Yankees. That team, the Ruth-Gehrig Yankees, many consider to be the best ever.

Quiz: There were six Hall of Fame players on the ’27 Yankees. How many can you name after Ruth and Gehrig? Answer below (Hint: one of them attended Middlebury College! True.).

An Aside: I have a hard time believing any team with no Black players can be held up as the greatest ever. Major League Baseball was segregated for 60 years, from 1887 to 1947. Could the ’27 Yankees have defeated ‘35 Pittsburgh Crawfords of the Negro Leagues? That team had five Hall of Famers: Satchel Paige, Josh Gibson, Cool Papa Bell, Oscar Charleston, and Judy Johnson.

Since that torrid start, the Yankees have been anything but unbeatable (27-35), and no better than the mediocre Red Sox, who are 23-30 since the All-Star break. In August, the Yankees were a woeful 10-18.

Red Sox fans took heart, hopeful the Yanks might suffer a collapse similar to the Sox in 1978, when a 14 game first half lead led to a dead heat at the end of the season and a one-game playoff loss to the . . . Yankees (Bucky “Bleeping” Dent!).

Now the Yankees are just one of the good teams in the post-season. The Astros, Mets, Braves, and Dodgers all have better overall records.

Ruthian: The Yankees righted the ship after their disastrous August, almost entirely because of the heroic performance of one player, Aaron Judge, who has been positively Ruthian. He is just two homers shy of the American League record for homers in a season; on Tuesday he homered and is tied with Babe’s 60 and only one behind Roger Maris’s 61 homers 61 years ago in 1961.

Judge is so big, 6’7”, 285 pounds — and so athletic! There has never been a player quite like him. He has played more than half his games in centerfield, the terrain of fleet, agile guys, like Willie Mays, the greatest player ever at 5’11”, 180 pounds.

Judge is having a season for the ages: 3rd in batting average in the American League, first in RBIs as well as homers. His OPS (on-base percentage plus slugging percentage) is a stratospheric 1.102 (anything over .800 is good). Plus, he seems like a good fellow, hard to hate, even in pinstripes.

Ruthian II: Judge’s only competition for the American League Most Valuable Player award is another player having a Ruthian year, a season unprecedented in the long history of the game. No one has ever done what Shohei Ohtani has done, this season and last, not even Babe Ruth, who only had one year (1918) when he was both a pitcher and a hitter.

Ohtani is one of the game’s best hitters (34 home runs this year – 4th in the AL; 46 last year) and best pitchers with 13 wins against 6 losses (5th best) and a 2.43 ERA (also 5th). He is among the leaders in multiple hitting and pitching categories. He strikes out 12 batters for every nine innings pitched.

Ruthian III: In the National League, the Cardinals are in first place in the NL Central Division, 26 games over .500. (87-61). Their much beloved star, 42-year-old Albert Pujols, has apparently discovered the fountain of youth in the second half of this season. He is having a Ruthian final act.

After 10 years with the LA Angels, he signed a one-year deal with the Cardinals this spring and announced this would be his last season, essentially a victory lap.

Rarefied air, great company. It will be exciting to follow Pujols and the Cards in the playoffs.

Quiz II: The Cardinals have the youngest manager in baseball. Can you name him? An autographed baseball to anyone who can without looking him up. (Answer below)

The Red Sox Old Man: The Sox have their own 42-year-old player, pitcher Rich Hill, a Bostonian (Milton, Mass.) who has played for 11 MLB teams, including the Red Sox three times. He is a dramatic contrast to today’s 95-100 mph flamethrowers: his fastball won’t break a pane of glass. His lifetime record is 81-59 with an ERA under 4.00.

He gets by on guts and guile: it’s soft stuff away, away, away, then the 88-mph fastball on the hands and it’s “have a seat, young man.”

Whither the Red Sox?: In many ways, it’s not the worst thing for us Sox fans that our club is not in the post-season: we will be less anxious generally, get more sleep, and enjoy the games with blessed neutrality.

The Sox must have a good off-season, keeping the core of the team and fortifying the pitching staff. I so hope they sign Xander Bogaerts who will “opt out” of his Red Sox contract this fall, become a free agent, and command a big contract, his due.

Bogaerts is the consummate professional, playing at a high level, every day, exuding quiet leadership. He has played more games at shortstop than any other Red Sox player, got his 1,400th hit last week, and may win the AL batting title (just one point separates him from the leader). 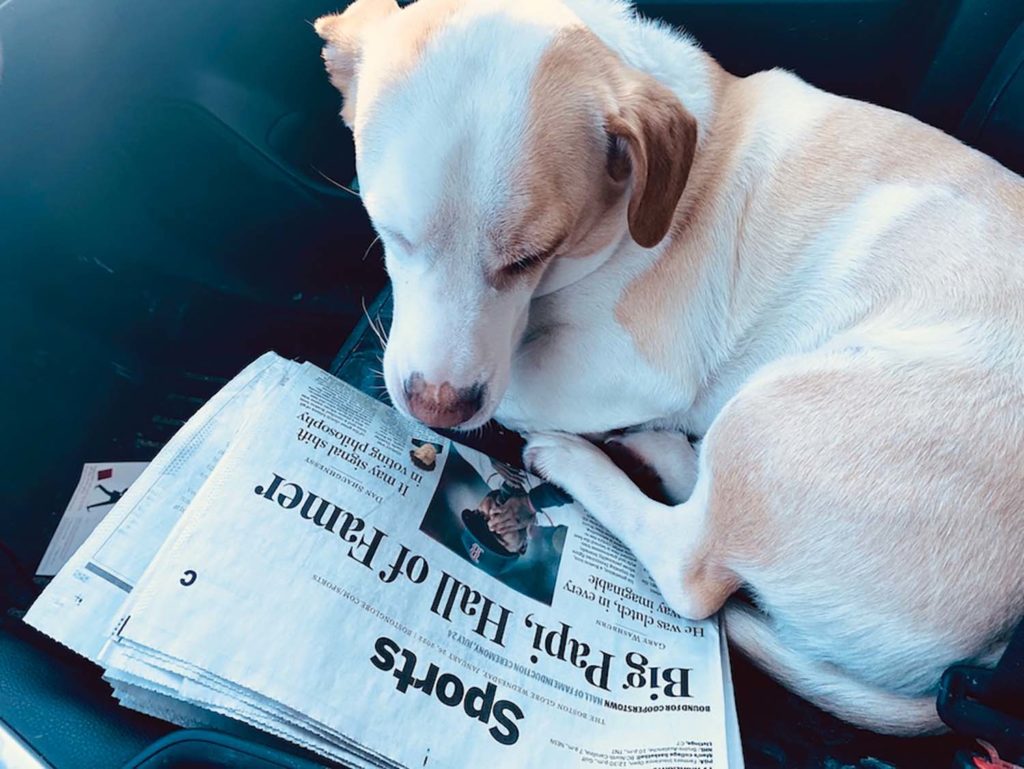 THE MORNING RITUAL for the columnist: a breakfast sandwich, cup of coffee, and the Boston Globe Sports Section to be consumed in the car with wingman Paco.

My all-time favorite Red Sox players can all be identified by single names — Pedro, Nomar, and Mookie. Add Bogey to that list. (Pedey is close. Manny screwed up. Papi is too big. Yaz was a chilly artisan, soberly efficient. Teddy Ballgame is in a separate category altogether, the apotheosis).

Good Luck, Tito! Here’s wishing Terry Francona and the Cleveland Guardians well in the post-season. It looks now as if the Guardians (hard to say, isn’t it?) will make it — they’re playing well at the moment: they have pitching! Is there any question that Francona is the best manager the Red Sox ever had?

Rough: I might place Bill Carrigan in second place. Like Francona, he won two World Series championships as Red Sox manager, in 1915 and ’16. He too had a Ruthian presence on his team: the youthful Babe Ruth himself, the best lefty pitcher in the American League, winning 18 games in ’15 and 23 in ’16.

Carrigan was a former big-league catcher, his nickname was “Rough,” and he was born and died and lived his non-baseball life (as president of the local bank) in my hometown of Lewiston, Maine. He played baseball at Lewiston High, like me!

Whenever I was in the car as a kid with my dad, he would invariably point to a big yellow house on Main Street and say, “That’s Bill Carrigan’s house!”

Quiz answer 1: One of those Hall of Famers was pitcher Waite Hoyt, who won 22 games in 1927. Hoyt spent the fall of 1918 at Middlebury College, part of a Navy program that trained at Middlebury during World War I. The others were Tony Lazzeri, Earle Coombs, Herb Pennock.

Quiz answer II: Oliver “Oli” Marmol is the 36-year-old Cardinals manager. He never played in the Majors, but he did play against the Vermont Lake Monsters for the Batavia Muckdogs.

Enjoy the post-season with me, baseball pals. Keep in mind what Yogi said, “You can’t win all the time. There are guys out there better than you are.”

Karl Lindholm can be contacted at [email protected].

DEAR SUN SPOTS: When I read the Sept. 19 Sun Spots about the grandparent scam, I could totally relate. When I got a call about 7:30 a.m. one day a couple years ago, it seemed so real. The person calling sounded exactly like my grandson. He said, “Grandma? I hate...

The crash took place on Sabattus Street, according to police. LEWISTON, Maine — A pedestrian is dead following a crash in Lewiston Monday evening.  According to Lewiston Police Department Sgt. Corey Jacques, Lewiston police and fire responded to the incident on Sabattus Street after receiving a call around 7:15 p.m.  The...