Poll: Biden’s Approval Rises But Concerns Over His Handling Of The Economy Remain

WASHINGTON (AP) — US President Joe Biden’s popularity improved substantially from his lowest point this summer, but concerns about his handling of the economy persist, according to a poll from The Associated Press-NORC Center for Public Affairs Research.

Support for Biden recovered from a low of 36% in July to 45%, driven in large part by a rebound in support from Democrats just two months before the November midterm elections. During a few bleak summer months when gasoline prices peaked and lawmakers appeared deadlocked, the Democrats faced the possibility of blowout losses against Republicans.

Their outlook appears better after notching a string of legislative successes that left more Americans ready to judge the president on his preferred terms: “Don’t compare me to the Almighty. Compare me to the alternative.”

The president’s approval rating remains underwater, with 53% of US adults disapproving of him, and the economy continues to be a weakness for Biden. Just 38% approve of his economic leadership as the country faces stubbornly high inflation and Republicans try to make household finances the axis of the upcoming vote.

Average gas prices have tumbled 26% since June to $3.71 a gallon, reducing the pressure somewhat on family budgets even if inflation remains high. Congress also passed a pair of landmark bills in the past month that could reshape the economy and reduce carbon emissions. 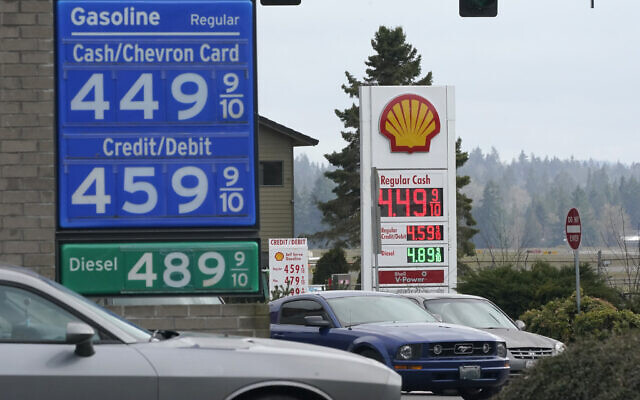 Illustrative: Gas prices are shown on March 7, 2022, in Tumwater, Washington, as the cost of gasoline hit the highest price that American motorists have faced since July 2008. (AP Photo/Ted S. Warren)

Republicans have also faced resistance since the Supreme Court overturned Roe v. Wade and its abortion protections. And Biden is openly casting former president Donald Trump as a fundamental threat to democracy, a charge that took on resonance after an FBI search of Trump’s Florida home found classified documents that belong to the US government.

This combination of factors has won Biden some plaudits among the Democratic faithful, even if Americans still feel lukewarm about his leadership.

“I’m not under any belief that he’s the best person for the job — he’s the best from the people we had to choose from,” said Betty Bogacz, 74, a retiree from Portland, Oregon. “He represented stability, which I feel President Trump did not represent at all.”

Biden’s approval rating didn’t exceed 40% in May, June or July as inflation surged in the aftermath of Russia invading Ukraine.

The president’s rating now is similar to what it was throughout the first quarter of the year, but he continues to fall short of early highs. His average approval rating in AP-NORC polling through the first six months of his term was 60%.

Interviews suggest a big reason for Biden’s rebound is the re-emergence of Trump on the national stage, causing voters such as Stephen Jablonsky, who labeled Biden as “OK,” to say voting Democratic is a must for the nation’s survival.

“The country has a political virus by the name of Donald Trump,” said Jablonsky, a retired music professor from Stamford, Connecticut. “We have a man who is psychotic and seems to have no concern for law and order and democracy. The Republican Party has gone to a place that is so unattractive and so dangerous, this coming election in November could be the last election we ever have.” 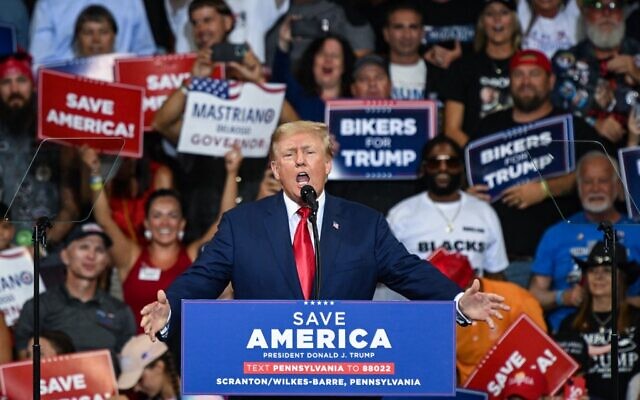 Former US President Donald Trump speaks during a campaign rally in support of Doug Mastriano for Governor of Pennsylvania and Mehmet Oz for US Senate at Mohegan Sun Arena in Wilkes-Barre, Pennsylvania on September 3, 2022. (Photo by Ed JONES / AFP)

Republicans feel just as negative about Biden as they did before. Only about 1 in 10 Republicans approve of the president overall or on the economy, similar to ratings earlier this summer.

Christine Yannuzzi, 50, doubts that 79-year-old Biden has the capacity to lead.

“I don’t think he’s mentally, completely aware of everything that’s happening all the time,” said Yannuzzi, who lives in Binghamton, New York. “The economy’s doing super poorly and I have a hard time believing that the joblessness rate is as low as they say it is.”

“I think the middle class is being really phased out and families are working two and three jobs a person to make it,” the Republican added.

Twenty-nine percent of US adults say the economy is in good shape, while 71% say it’s doing poorly. In June, 20% said conditions were good and 79% said they were bad.

Democrats are more positive now than they were in June, 46% vs. 31%. Republicans remain largely negative, with only 10% saying conditions are good and 90% saying they’re bad.

About a quarter of Americans now say things in the country are headed in the right direction, 27%, up from 17% in July. Seventy-two percent say things are going in the wrong direction.

Close to half of Democrats — 44% — have an optimistic outlook, up from 27% in July. Just 9% of Republicans are optimistic about the nation’s direction. 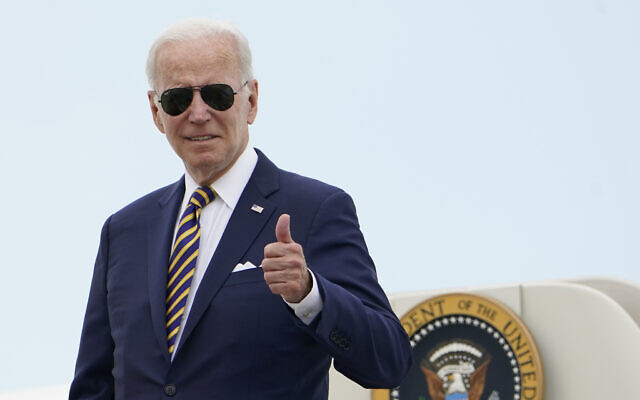 US President Joe Biden gives a thumbs up as he boards Air Force One at Andrews Air Force Base, Maryland, August 10, 2022. (AP Photo/Manuel Balce Ceneta)

Akila Atkins, a 27-year-old stay-at-home mom of two, thinks Biden is “OK” and doesn’t have much confidence that his solutions will curb rising prices.

Atkins says it’s gotten a little harder in the last year to manage her family’s expenses, and she’s frustrated that she can no longer rely on the expanded child tax credit. The tax credit paid out monthly was part of Biden’s $1.9 trillion coronavirus relief package and has since lapsed.

Whatever misgivings the Democrat in Grand Forks, North Dakota, has about Biden, she believes he is preferable to Trump.

“I always feel like he could be better, but then again, he’s better than our last president,” she said.