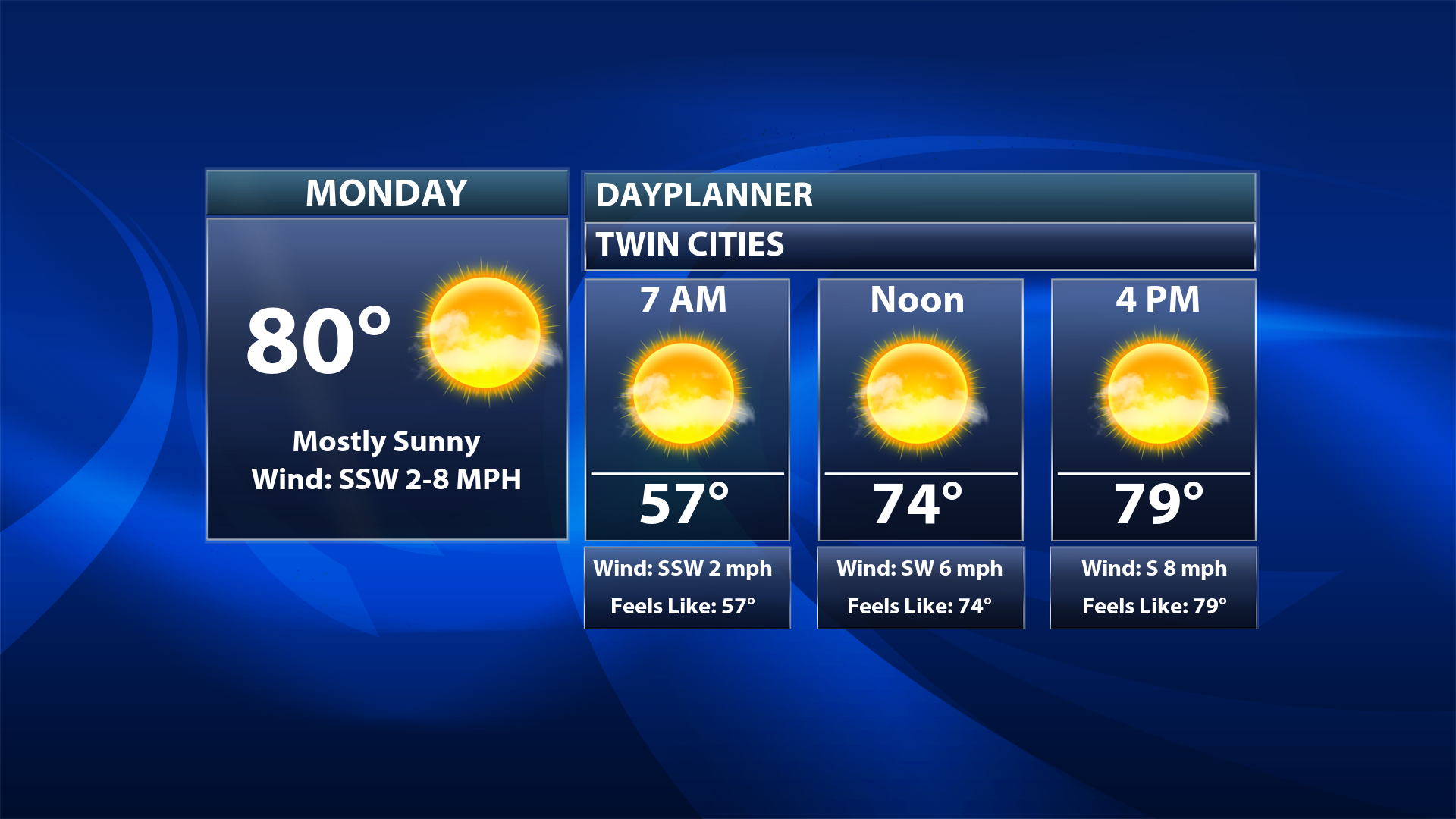 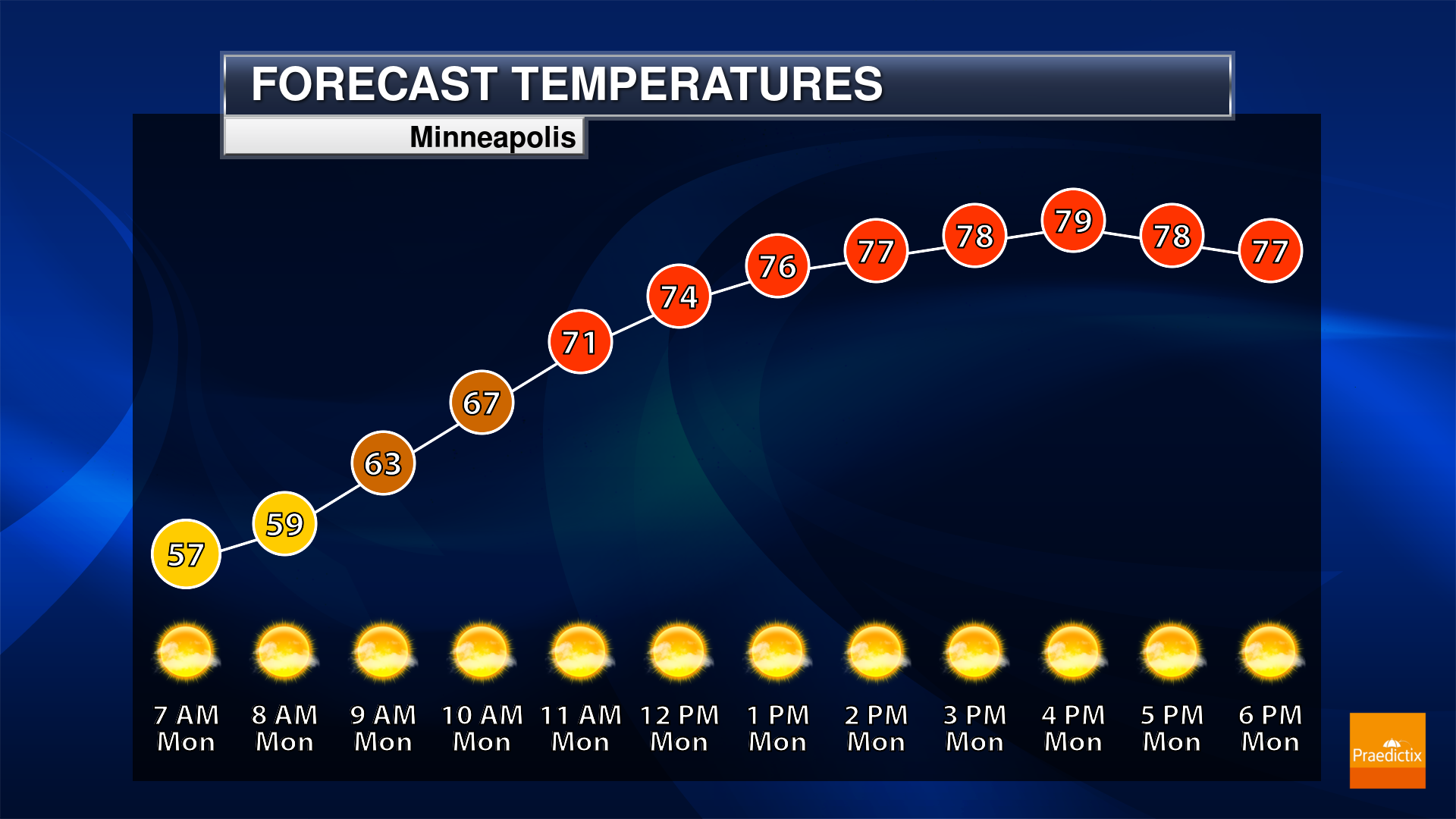 After a cloudy Sunday, high pressure is moving into the region for Monday. This will lead to mainly sunny skies in the metro. Morning temperatures will start off in the mid to upper 50s with highs around 80F. 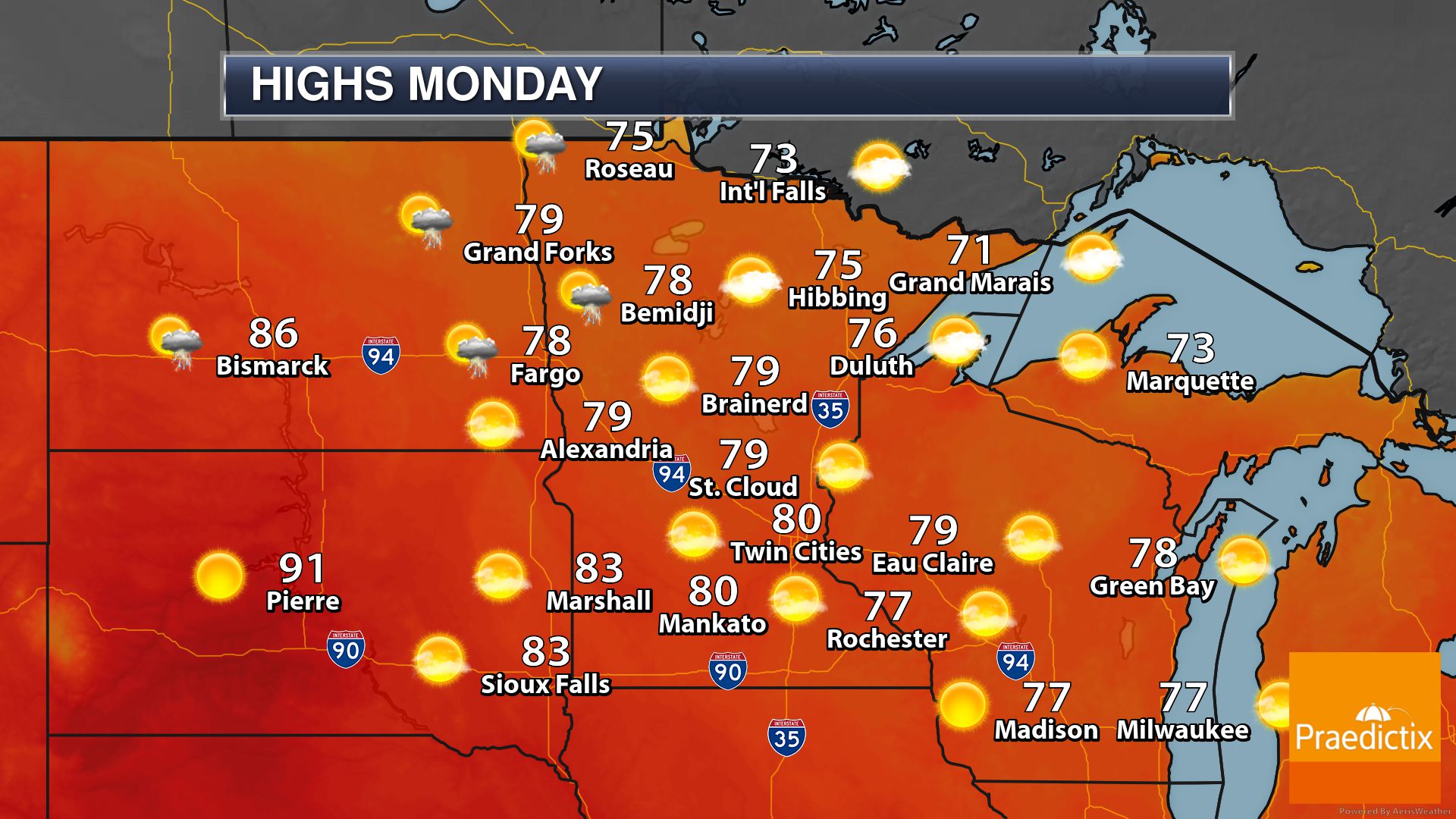 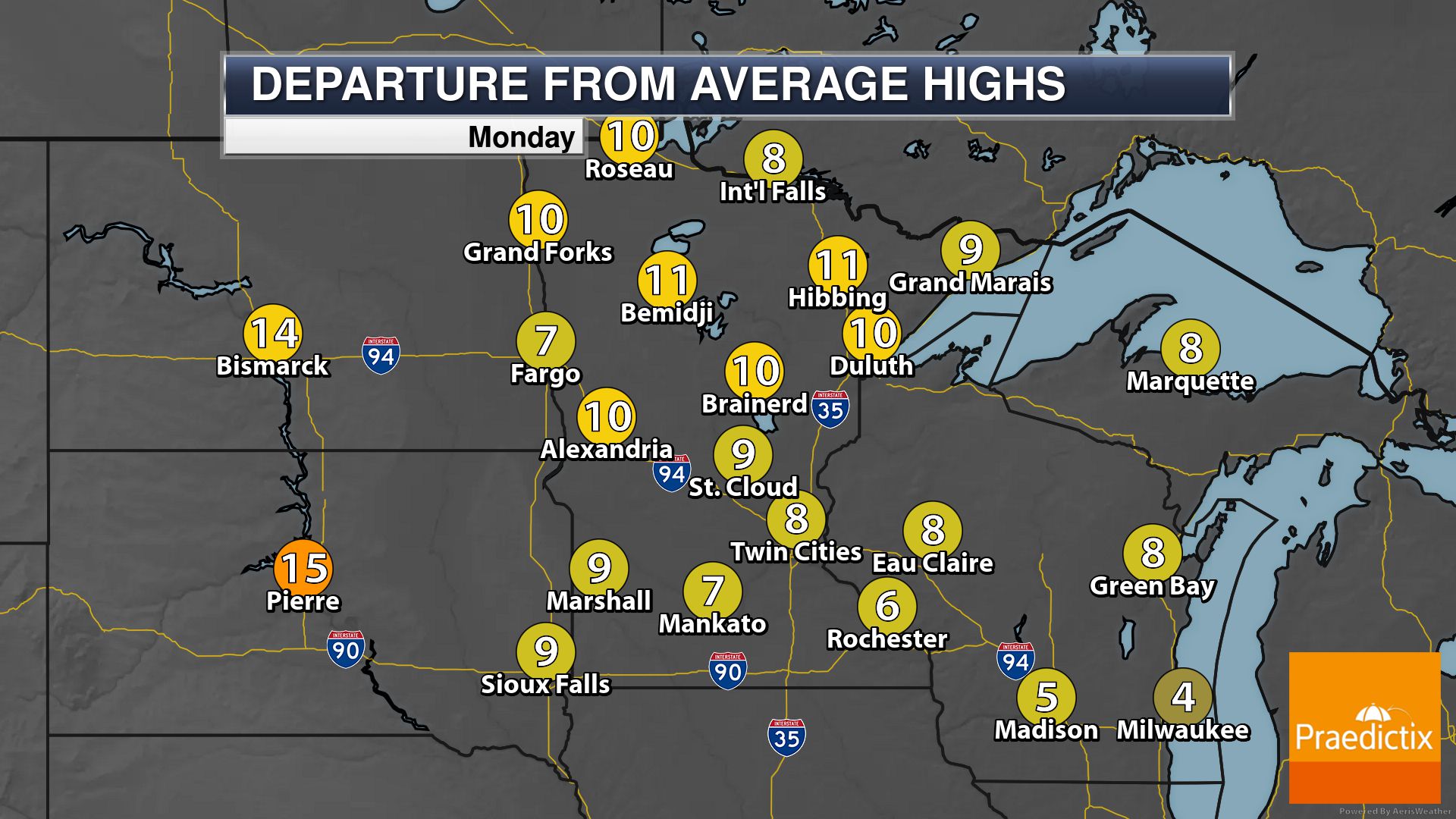 While most of the state will see dry weather during the daytime hours on Monday, a few scattered storms could be possible during the afternoon up in northwestern portions. Highs will be at least 5-10F degrees above average statewide on Monday in the 70s and 80s. 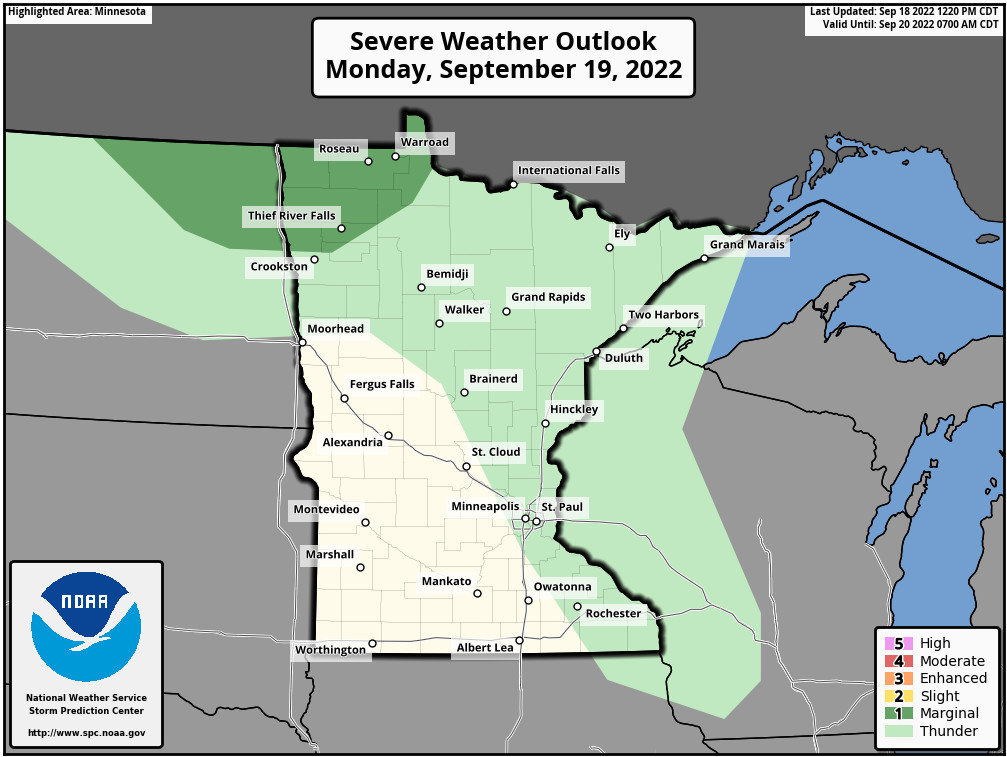 While we will watch the potential of a few showers Monday Night here in the metro, they are not expected to be severe. An isolated strong storm or two could be possible during the afternoon and evening hours in northwestern Minnesota and northeastern North Dakota, with wind and hail the main threats. 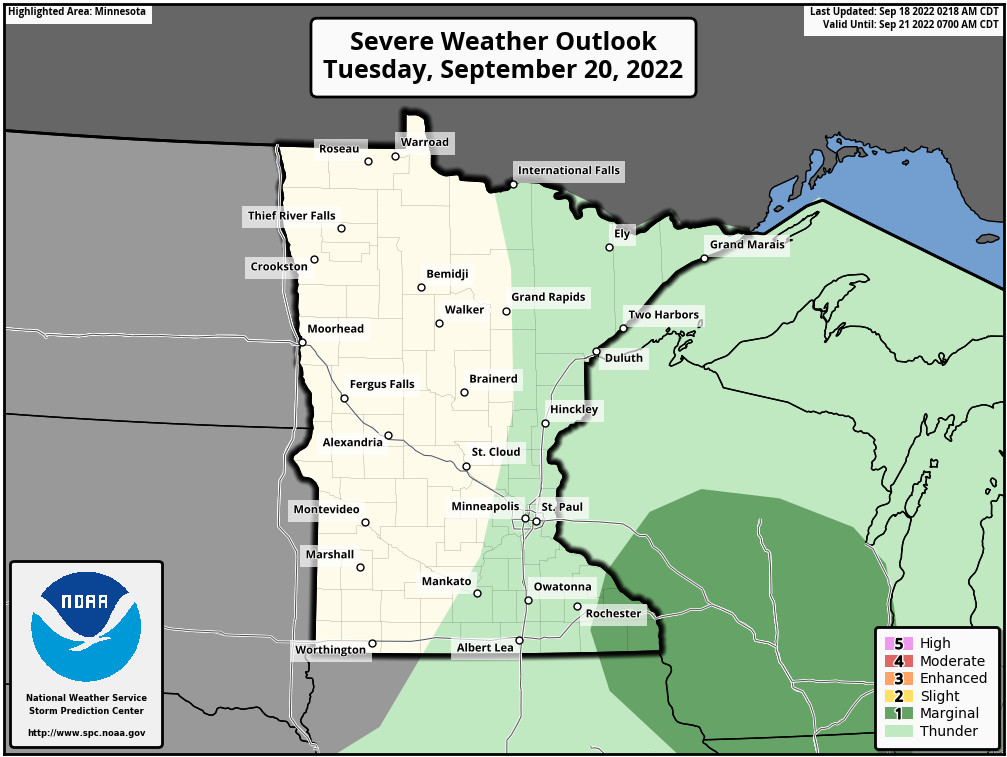 Meanwhile, far southeastern Minnesota into Wisconsin could see a few strong storms Tuesday evening. Once again hail and wind would be the main severe threats.

Last 80F of 2022 Tuesday? More Fall-Like Weather Second Half Of The Week 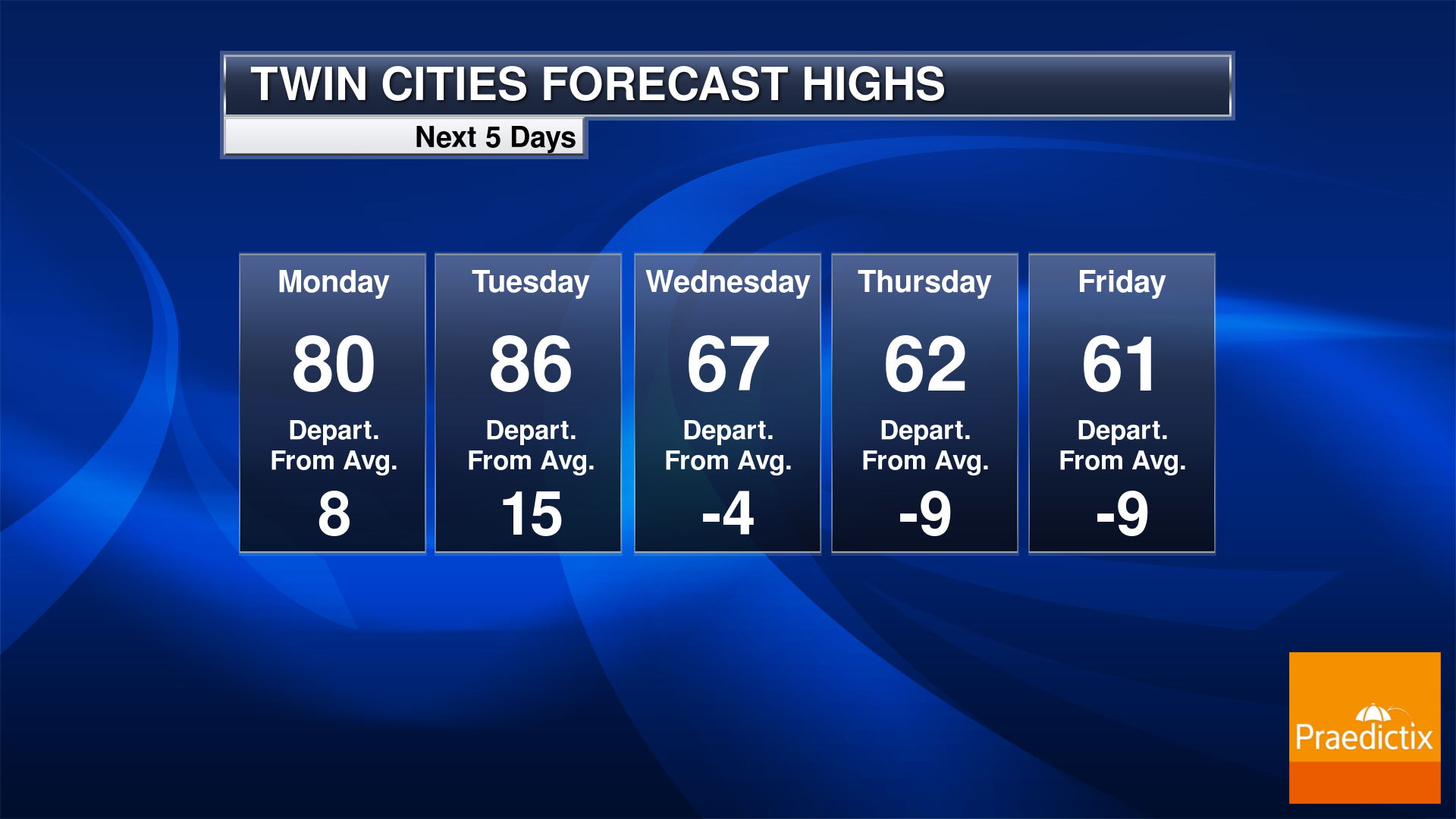 If you are trying to hold on to the last gasps of summer… the next couple of days may be your last chance. After a high of around 80F Monday, we’ll climb into the mid-80s Tuesday under sunny skies. A cold front sweeps through bringing in northwest flow and much cooler weather for the second half of the week. High pressure moves in for Thursday, but a rainy system looks likely Friday into early Saturday as highs could struggle to make it out of the 50s into the low 60s in the metro. 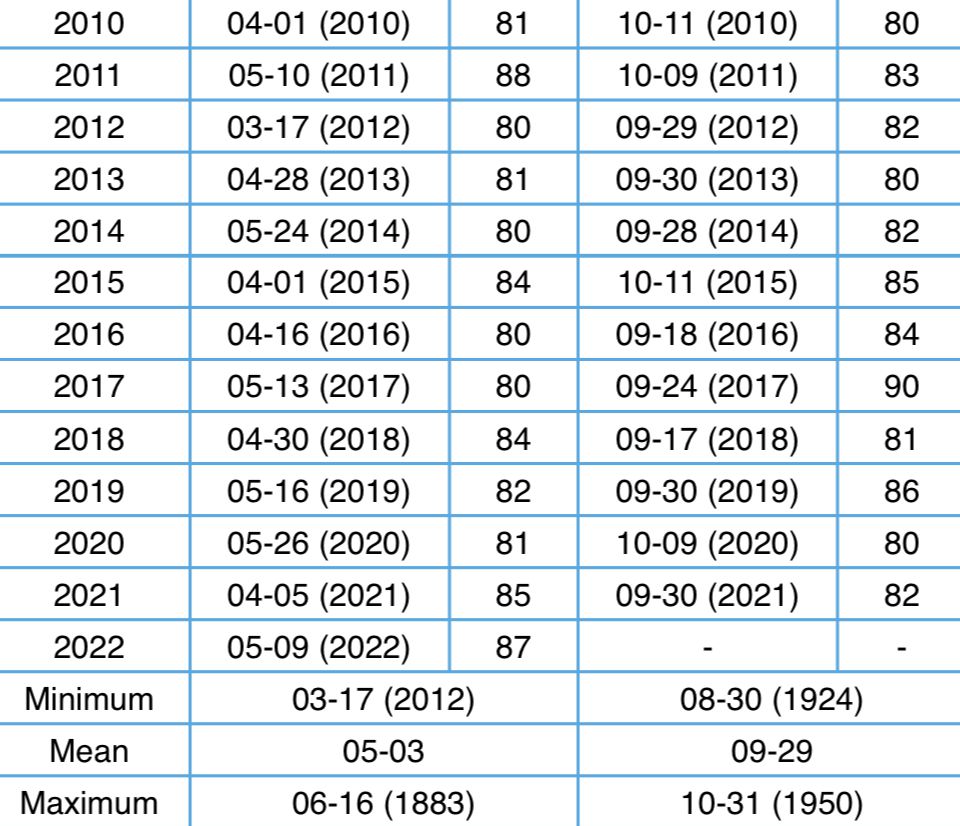 Our average last 80F degree day across the entire Twin Cities record is September 29th. Last year it was on September 30th. So even if Tuesday doesn’t end up being the very last 80F of the year… the days are numbered for any more to occur. 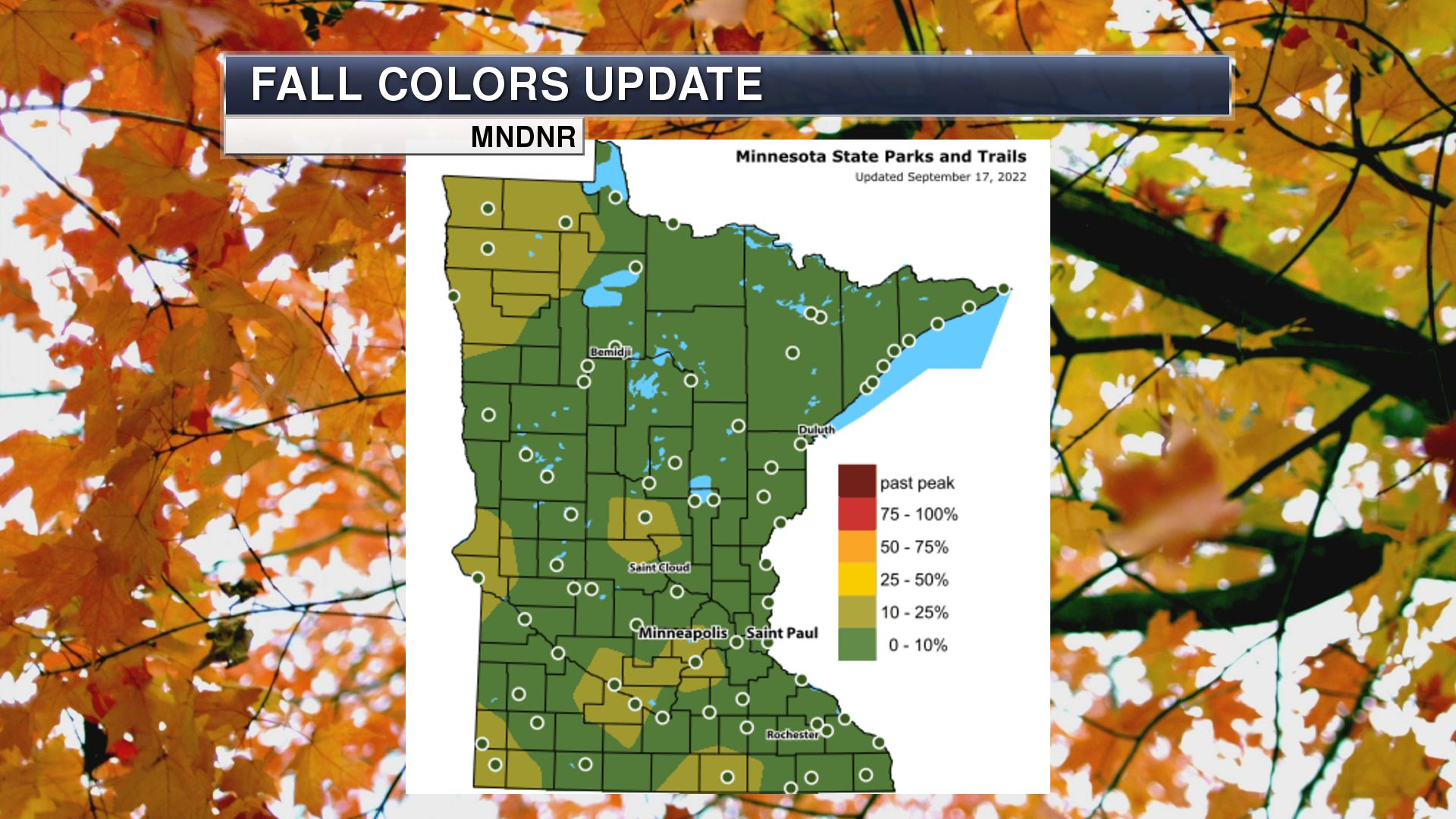 We continue to watch the ever-changing fall color picture out there, a sign that our non-winter days are winding down. There are several areas of the state where Minnesota DNR State Parks are reporting 10-25% color. On Saturday, Charles A. Lindbergh State Park reported, “The elms and ashes are starting to get serious about turning yellow, but the other species still seem reluctant to change.” You can keep your eye on this map over the next several weeks from the MN DNR by clicking here.

Here’s a handy map of typical peak fall colors from the MN DNR. This ranges from mid/late September in far northern Minnesota to mid-October in southern parts of the state.

Every threat is an opportunity. And if the weather didn’t change every once in awhile we might still be living in caves. Extreme temperature swings are a driver of innovation. Staying warm and dry has inspired modern-day necessities from HVAC to insulation and indoor plumbing. Yay. In a 2018 paper Evert Van de Vliert concluded: “Colder latitudes at a greater distance from the equator are home to higher rates of creativity, defined culturally here as including both inventive idea generation and innovative idea implementation.” Which is a fancy way of saying “temperature extremes force us to invent our way out of discomfort”. Bring on the cold fronts!

The Autumnal Equinox arrives 8:03pm Thursday, and by then it will feel like fall. But first, cue more late-season warmth: near 80F today and mid-80s Tuesday. A windblown cool front arrives Wednesday with daytime highs in the 60s Thursday and Friday. By the middle of next week ECMWF is predicting highs in the 50s.

Feeling creative yet? Me neither. Any day now. 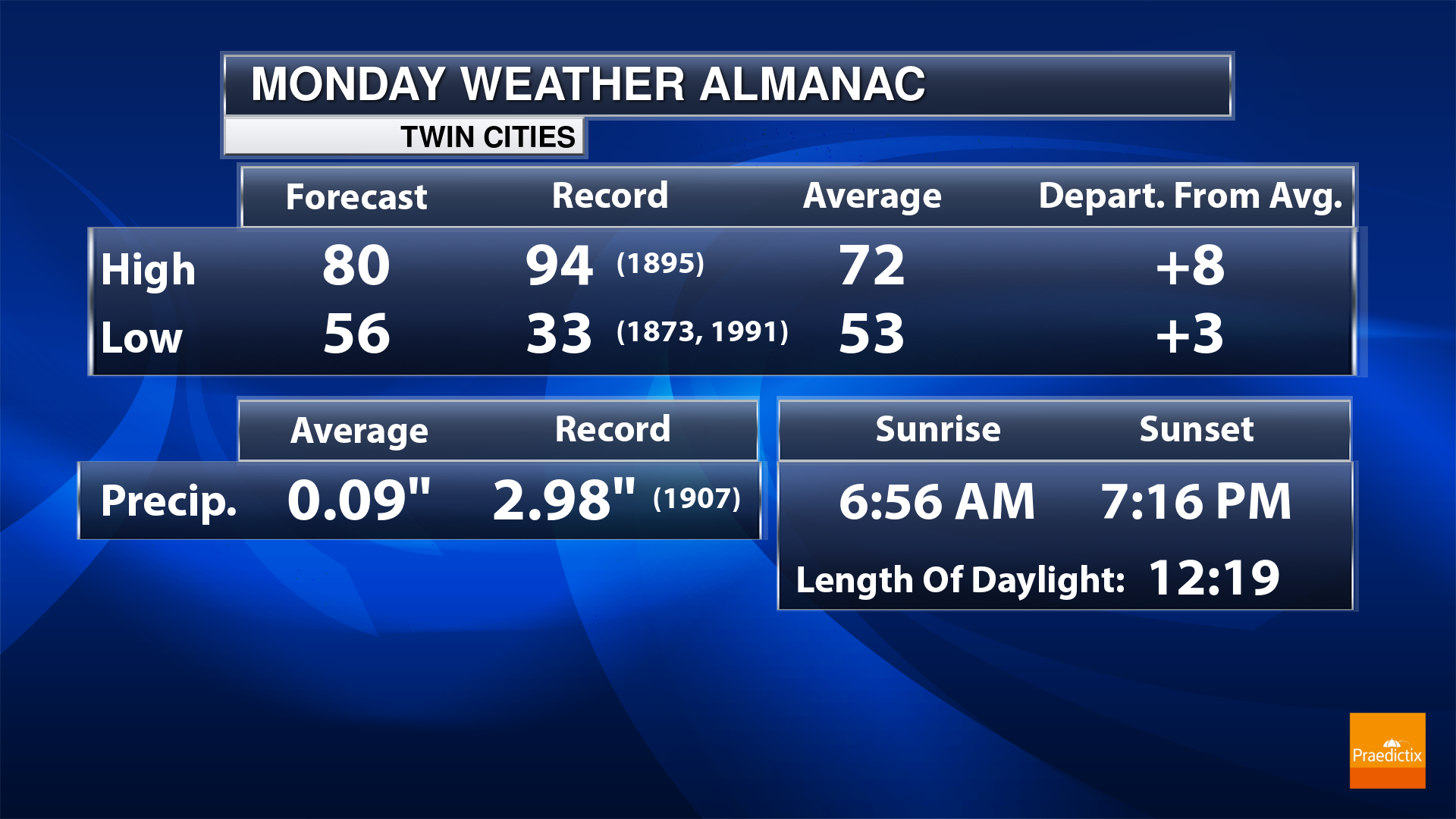 1980: Golfball to baseball sized hail hits St. Paul. One company has 75 to 95 percent of the glass in their greenhouses smashed. 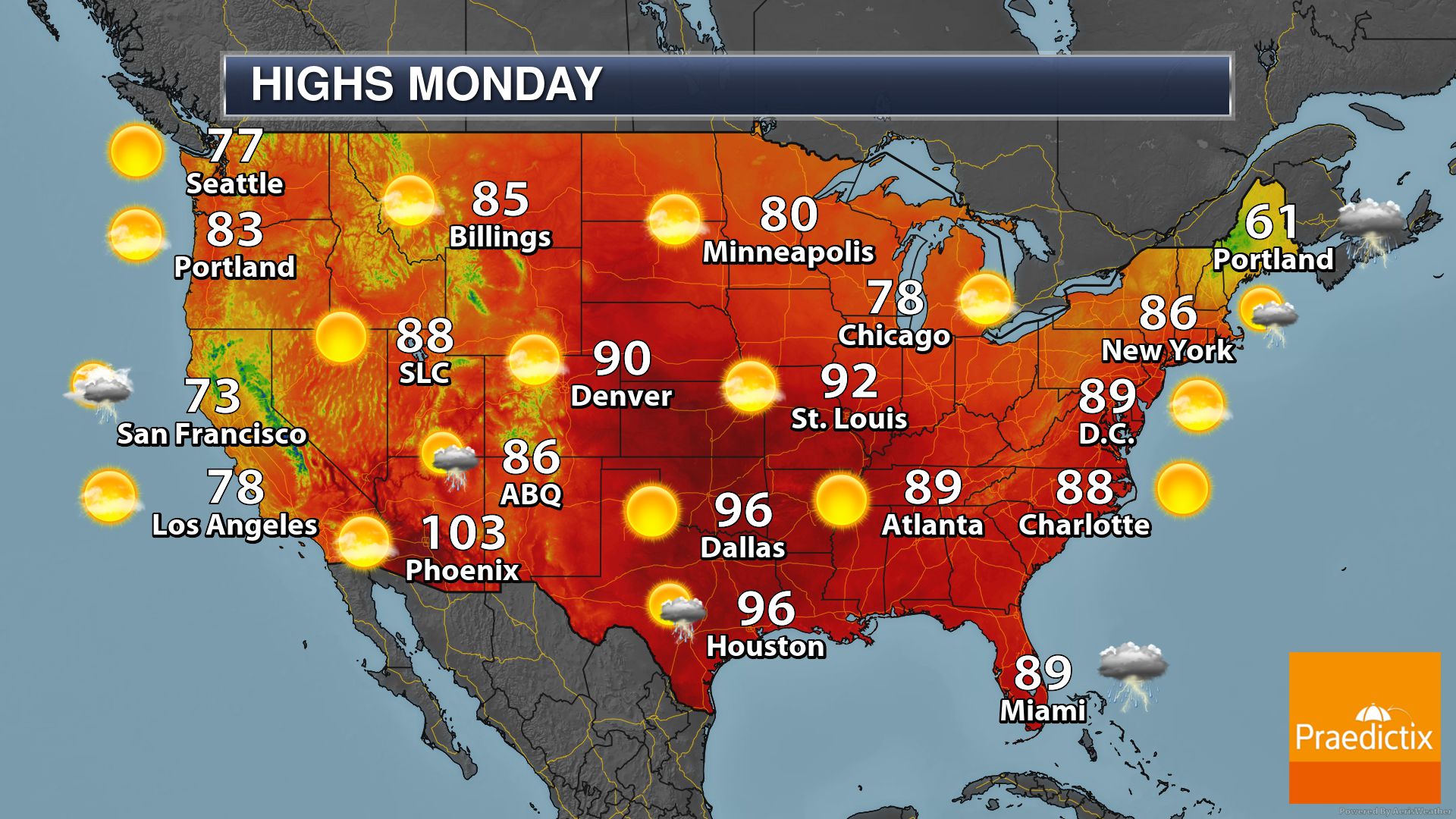 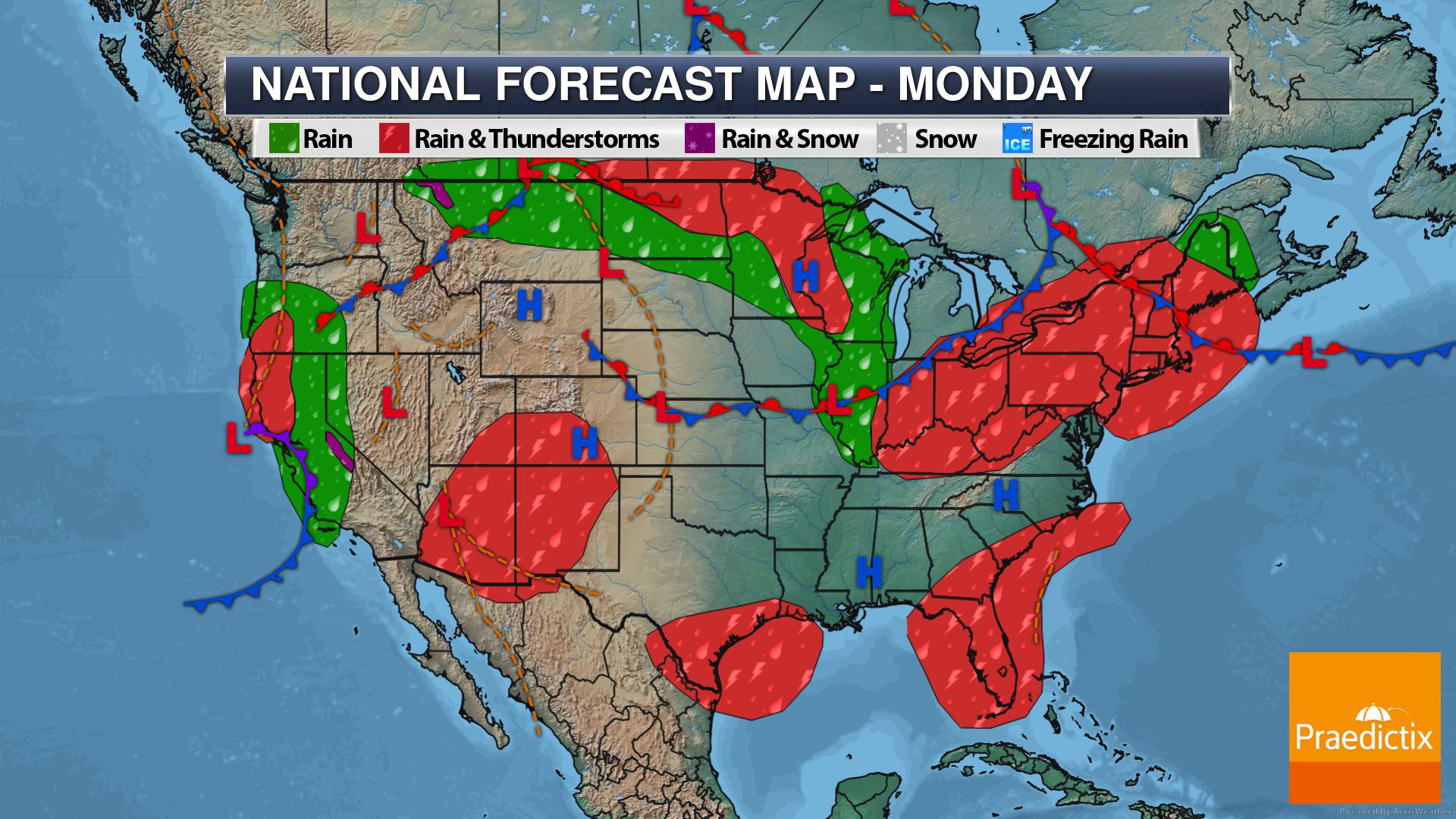 Several areas of showers and storms can be expected across the lower 48 on Monday. Several systems will bring storm chances across the northern tier of states. A low moving into California will bring rain potential and even some mixed snow in the Sierra. A few storms will be possible in the Southwest, Southeast, and southern Texas. 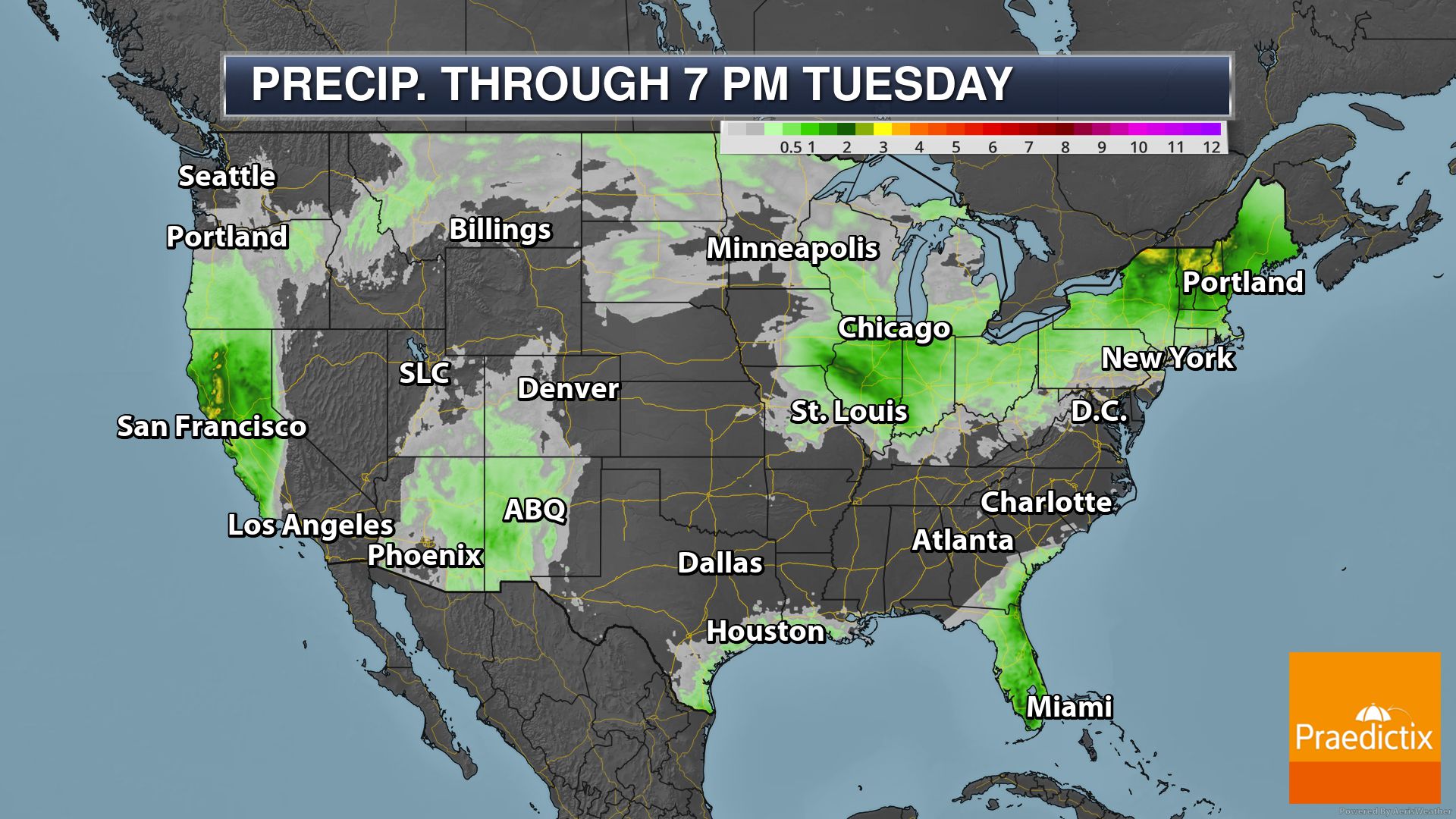 A few areas of heavy rain can be expected through Tuesday across the lower 48. One of those will be in parts of Northern California, with another in the Northeast. In some of these areas, rainfall amounts over 3″ will be possible. 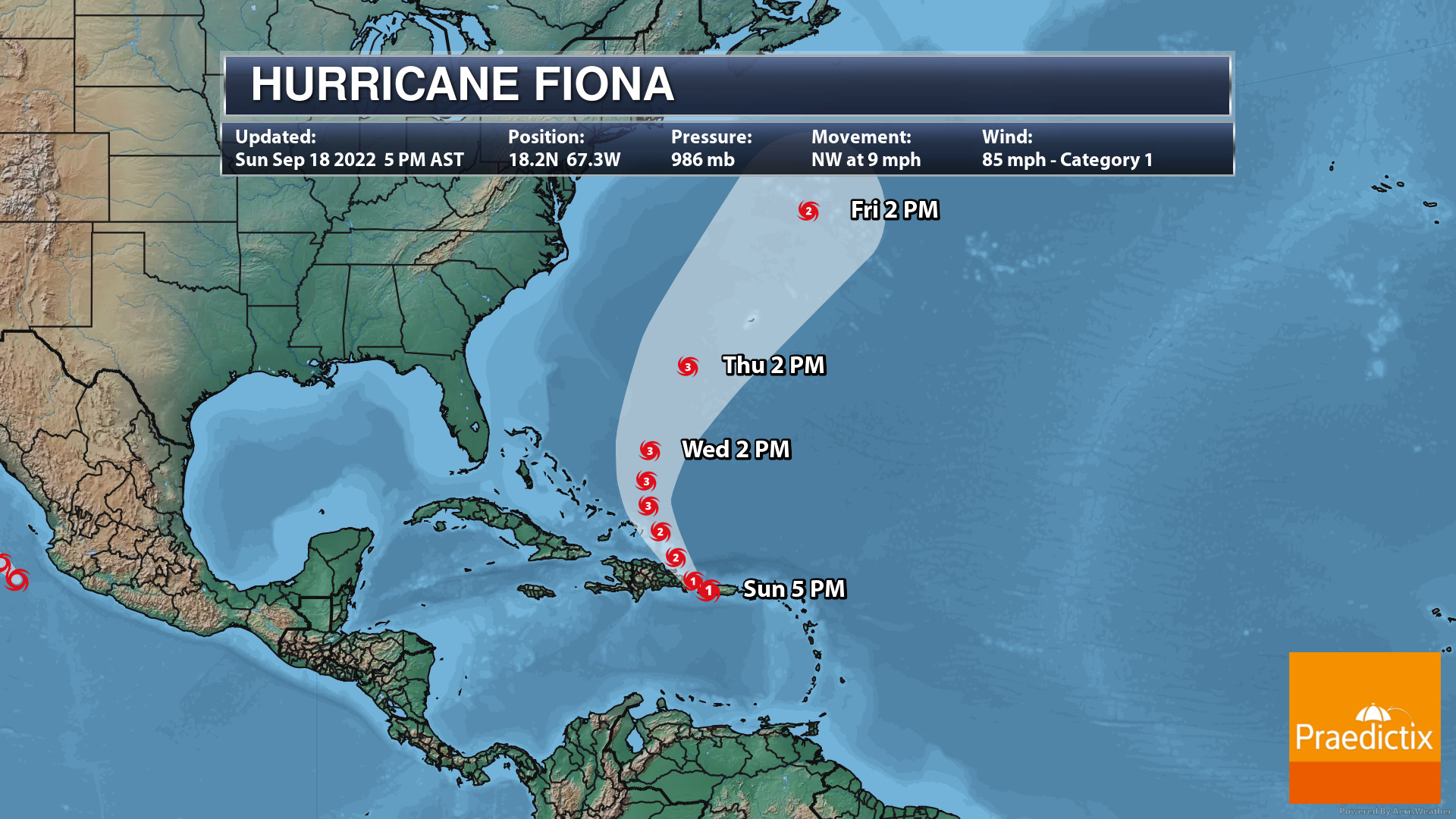 Earlier on Sunday, Hurricane Fiona made landfall in southwestern Puerto Rico near Punta Tocon at 3:20 PM AST. Catastrophic rainfall and flooding has been ongoing on Puerto Rico due to Fiona. Fiona will continue to move near the northern coast of Dominican Republic through Monday, near/east of the Turks and Caicos on Tuesday, and potentially near Bermuda late in the week.

America might be headed for a ketchup crisis. Here’s how climate change is affecting tomato crops.

More from Grid: “How do you like your tomatoes? Maybe on a sandwich or in a caprese salad? Or perhaps you prefer the processed versions — pasta sauce, pizza sauce or, of course, America’s favorite condiment: ketchup. Americans consume upward of 30 pounds of the fruit a year, three-quarters of that in processed form. While the commercially produced fresh fruit varieties are mostly grown in heavily controlled environments, away from the elements, climate change is looking like it will be a big issue for processing tomatoes (the ketchup-making kind). But, before you start stocking up on ketchup or (gasp) moving over to team mustard, there are a few factors at play that might make the situation less (or, yes, potentially more) dire.“

China lost its Yangtze River dolphin. Climate change is coming for other species next

More from CNN: “They called it the “Goddess of the Yangtze” – a creature so rare that it was believed to bring fortune and protection to local fishermen and all those lucky enough to spot it. But overfishing and human activity drove it to the brink of extinction and it hasn’t been seen in decades. “The baiji, or Yangtze River dolphin, was this unique and beautiful creature – there was nothing quite like it,” said Samuel Turvey, a British zoologist and conservationist who spent more than two decades in China trying to track the animal down. “It was around for tens of millions of years and was in its own mammal family. There are other river dolphins in the world but this one was very different, so unrelated to anything else,” Turvey said. “Its demise was more than just another species tragedy – it was a huge loss of river diversity in terms of how unique it was and left huge holes in the ecosystem.”“

More from Oregon Live: “Huckleberries are highly sought after, but the coveted mountain fruit was difficult to find across much of northern Idaho and eastern Washington this year. Pickers were able to locate some productive plants and patches, but they frequently encountered healthy bushes that had few berries or none at all, The Lewiston Tribune reported Friday. “In general terms, this is not a very good year,” said Wayne Kasworm, a grizzly bear biologist for the U.S. Fish and Wildlife Service who tracks huckleberry production in the Selkirk, Cabinet and Yaak mountain ranges. With a changing climate, scientists like him increasingly are tracking huckleberries that are an important food source for grizzly bears and other wildlife and coveted by people as well.“

Mt. Blue’s Noah Prescott celebrates a touchdown in the end zone during a Sept. 23 game against Winslow in Farmington. Andree Kehn/Sun Journal FARMINGTON — The Mt. Blue football team had already won two games entering Friday’s showdown with Messalonskee. What the Cougars were lacking was a signature win. After...

Families being investigated by child welfare workers need legal help before a case ends up in court, advocates for victims of domestic violence told a legislative panel Monday. Otherwise, victims might hesitate to call for help, Erika Simonson, child and family programs coordinator at the Maine Coalition to End Domestic...

The BB gun was discovered by a bus driver. LEWISTON, Maine — The superintendent of Lewiston schools announced on Twitter Monday the confiscation of a BB gun at the Lewiston middle school.  Jake Langlais said in the tweet, "LMS Admin and the SRO were able to identify and isolate things...